Interest rate to be brought down: PM 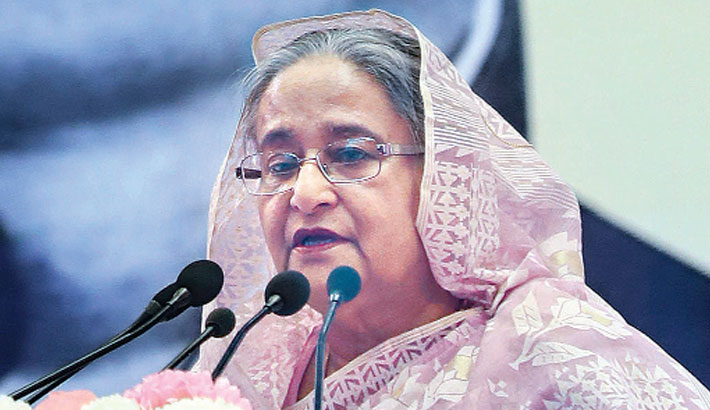 Expressing here government’s firm stance to bring down the interest rate of bank loan to a single digit, Prime Minister Sheikh Hasina on Sunday said the government will take measures again to reduce the interest rate for the sake of the country’s industrialisation, reports UNB.

“We’ll sit again to discuss how to reduce the interest rate of bank loan,” she said while inaugurating the weeklong first national industrial fair in the city.

The Industries Ministry organised the National Industrial Fair 2019 at Bangabandhu International Conference Centre with a view to promoting and expanding the market of local industrial products and attract investment.

The Prime Minister thought that the interest rate of bank loan is the biggest barrier to the country’s industrialisation now.

Hasina said the government earlier took initiatives to reduce the bank interest rate and provided some facilities to the banks. “Some banks brought down the interest rate to 9 percent accordingly, but all didn’t do so. It (the rate) was taken to 14-16 percent again,” she added.

The Prime Minister questioned why the banks did not reduce the interest rate despite enjoying the facilities.

Sheikh Hasina said the owners of banks are running mills and factories and also doing businesses.

Noting that now she will have to interfere in this area she said, “They’re running banks and also industries, but won’t reduce the interest rate. What businesses they have and whether they’re paying tax and VAT properly.”

The Prime Minister urged the entrepreneurs to pay the bank loans and its interest in time for keeping the banks operational. “If so, it won’t be very tough to reduce the interest rate,” she added.

Noting that the country’s economy is mainly based on agriculture, she stressed the need for setting up food processing industries to export the items on a large scale to different countries, particularly to neighbouring markets alongside fulfilling the local demand.

“We don’t want industries to be developed haphazardly destroying arable lands. We also need to keep in mind that we’ve to fulfill the food demand of 16 crore people. We can export food items on a large scale through producing and processing agricultural products.

Besides, we’ve a big domestic market. We also can catch big markets in neighbouring countries,” she said.

She asked the businessmen and the authorities concerned to find out new markets and set up industries accordingly after assessing demand of products in different countries.

Sheikh Hasina urged all to work keeping it mind that the ongoing trend of the country’s development is not interrupted.

She said the government is relentlessly implementing its plans to promote agro-based industrialisation in the country to generate jobs and boost production and export.

The Prime Minister urged entrepreneurs to maintain the standard of food products to increase the export volume of food items.