‘An idea that will change India’ 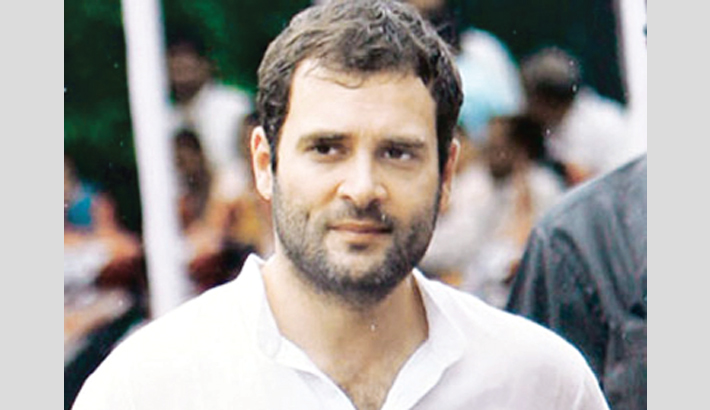 Vijaywada: Congress president Rahul Gandhi on Sunday made a strong pitch for the minimum income guarantee scheme that the party has promised to implement if it is elected to power in the Lok Sabha elections in April-May. He said the income guarantee plan is a “revolutionary idea” not implemented anywhere in the world, reports Hindustan Times.

“We have been thinking how to fix the damage Mr Narendra Modi has done in last five years…And we have come out with a revolutionary idea…an idea that will change the face of India,” said Gandhi at a public rally in Andhra Pradesh’s Anantapur.

He said minimum income guarantee scheme is “an idea that will wipe out poverty from this country forever.” Named as NYAY (standing for Nyuntam Aay Yojana) meaning justice, the promised scheme aims at providing cash support to poorest 20 per cent households of the country. The scheme was announced by Gandhi last week in New Delhi.

In Andhra Pradesh, where the Congress is contesting against ruling Telugu Desam Party with which it has aligned at the national level to challenge the BJP-led ruling coalition, Gandhi said, “We have to identify the 5 crore poorest families in the country and once we identify the poorest 5 crore families, we will simply give them Rs 72,000 per year. Twenty-five crore people will benefit from our scheme.” The Congress president also promised to “deliver farm loan waiver to the farmers of Andhra” and special category status to the state if the party is voted to power in 2019 Lok Sabha polls.

Earlier, Gandhi, at another election rally in Vijayawada, declared that if the Congress was voted to power at the Centre, he would carry out “real surgical strike” on poverty through NYAY. He said while Prime Minister Narendra Modi had declared a war on the poor and the downtrodden, the Congress would carry out a war on poverty. “We shall give justice to the poor through NYAY. This is our non-violent weapon against poverty,” he said.

“We promise to pay Rs 3.60 lakh to every poor family in the next five years. I don’t lie like Modi does. He said he would get Rs 15 lakh deposited in the account of every poor person. It was a lie. The Modi government could not fufill the promise. I don’t want to make that promise, but I assure you I will give Rs 72,000 to the poorest in the country,” he said.He said the erstwhile United Progressive Alliance (UPA) governments had brought 14 crore people out of poverty line and provided employment to lakhs of people through employment guarantee schemes like NREGA.

“We delivered what we had promised. We ensured food security to the poor, gave our children meals in schools, created new law to protect lands of farmers, tribals and Dalits,” he said.

The BJP had earlier mocked his poverty alleviation announcement and pointed out that his grandmother and former Prime Minister Indira Gandhi had coined the slogan ‘Garibi Hatao’ but the Congress government did not eradicate poverty from the country.

The Congress leader alleged that Modi had looted the poor and paid to Anil Ambani, Nirav Modi, Mehul Choksi and Vijay Mallya. “Vijay Mallaya stole Rs.10,000 crore and before leaving the country. He spoke to the Finance Minister. He was allowed to run away. Mehul Choksi gave money to Finance Minister’s daughter,” he charged.

He said the Modi government had ruined the country’s economy and trade by undertaking demonetization that hit the middle class and the poor very hard. He also took a swipe at Modi government for the way the Goods and Services tax (GST) was introduced. “The Gabbar Singh Tax complicated the life of the small and mid-size businessmen,” he said.

The Congress president promised to waive crop loans in Andhra Pradesh within two days of coming to power, as it had done in the case of Chhattisgarh, Madhya Pradesh and Rajasthan. “And I reiterate my commitment to grant special category status to Andhra Pradesh, as promised by former prime minister Dr Manmohan Singh in Rajya Sabha while passing the AP Reorganisation Act,” he said.

Gandhi, however, did not make any direct attack on the Telugu Desam Party government in Andhra Pradesh. He, however, found fault with AP chief minister N Chandrababu Naidu and other parties for not taking up aggressively the demand for special category status.

The Congress is facing a very a tough fight in Andhra Pradesh where it failed to win a single Lok Sabha seat in 2014. The state will go to polls on April 11.