US denies report it is leaving up to 1,000 troops in Syria 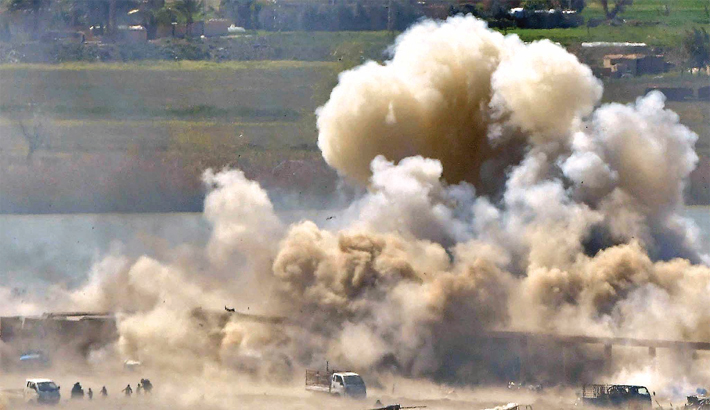 People are seen fleeing (bottom L) as heavy smoke rises above the Islamic State (IS) group’s last remaining position in the village of Baghouz during battles with the Syrian Democratic Forces (SDF), in the countryside of the eastern Syrian province of Deir Ezzor on Monday. A shroud of black smoke covered the Islamic State group’s last Syria redoubt on the day as US-backed forces battled holdout jihadists after a night of shelling and heavy air strikes. —AFP PHOTO

Turkey has recently talked about a possible joint operation with neighbour Iran to counter outlawed militants from the the Kurdistan Workers’ Party (PKK), but this is the first time Turkish authorities have confirmed a raid.

“We started staging a joint operation with Iran against the PKK on our eastern border as of 0800 (0500 GMT) this morning,” Suleyman Soylu said of the operation against the PKK, listed as a terror group by Ankara and its Western allies.

“We will announce the result later,” he said.

Meanwhile, the United States strongly denied Sunday a report that it intended to leave almost 1,000 troops in Syria, adding plans for a residual force of around 200 troops had not changed, reports AFP.

The Wall Street Journal had reported Sunday that as talks with Turkey, US-backed Kurdish forces and European allies have failed to produce a deal on a “safe zone” in northeastern Syria, the US now intended to keep working with Kurdish fighters in the country.

It quoted US officials as saying the plan could see up to 1,000 US forces spread across the country.