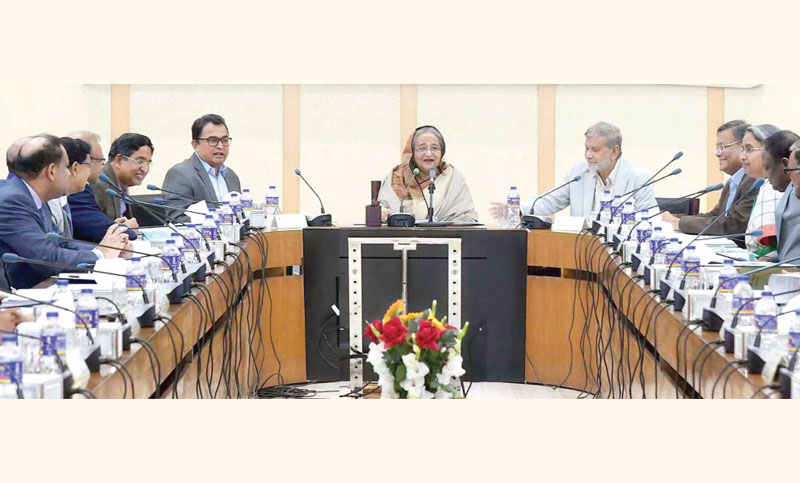 Prime Minister Sheikh Hasina presides over a meeting of the Executive Committee of the National Executive Council (ECNEC) at NEC conference room at Sher-e-Bangla Nagar in the capital on Tuesday.

The Executive Committee of the National Economic Council (Ecnec) on Tuesday approved eight projects, including one to set up an economic zone in Narayanganj for Japanese investors spending Tk 2,582 crore (Tk 25.82 billion).

With ECNEC chairperson and Prime Minister Sheikh Hasina in the chair, the approval came from the ECNEC meeting held at the NEC Conference Room in the city’s Sher-e-Bangla Nagar area.

Briefing the reporters after the meeting, Planning Minister MA Mannan said that a total of eight projects were approved today involving an overall estimated cost of Taka 6,276.24 crore (Tk 62.76 billion).

All the approved eight projects are fresh projects. The Planning Minister said out of the total project cost of Taka 2,582.18 crore (Tk 25.82 billion) for the Japanese Economic Zone, Taka 454.35 crore (Tk 4.54 billion) will come from the state exchequer while the rest of Taka 2,127.82 crore (Tk 21.27 billion) as project assistance from Japan through Japan International Cooperation Agency (JICA).

The decision to set up a special economic zone for Japanese investors was taken during the visits of the prime ministers of both Bangladesh and Japan to each other’s country in 2014. Bangladesh Economic Zones Authority (BEZA), the implementing agency of the project titled ‘Infrastructure Development for Japanese Economic Zone at Araihazar’, will develop land, construct access roads and set up a power plant, sub-station, transmission lines and gas pipelines under the project.

Earlier in 2017, the government took up a Taka 991 crore (Tk 9.91 billion) project for land acquisition in Narayanganj and Chattogram. Under the project, the land acquisition for the Japanese economic zone is going on in Araihazar.