Golden days ahead for golden fibre 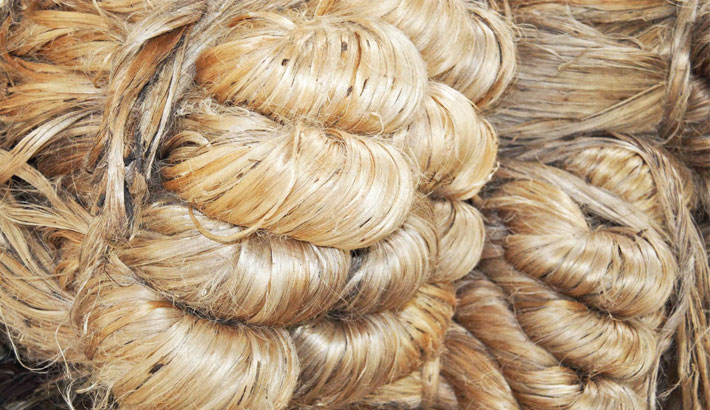 Jute, once known as the golden fibre, is ushering in new hope thanks to diversification of jute products and widening the export market.

Demand for jute and jute-based products are growing in the country as well in the global market as jute products are biodegradable and come at reasonable prices.

During the last few years, the government has taken a wide range of initiatives to revive the potential of jute sector.

The government has been conducting research, formulating new regulations, upgrading jute mills, and imposing eco-tax on polythene to encourage the use of jute products. The government is also going to create a Tk 10,000 crore fund for the development of the jute sector.

The government started observing National Jute Day on March 6 every year since 2017. This year, the day will be observed through a series of programmes, including discussion, rallies, seminar and workshops this year as well.

Textiles and Jute Minister Golam Dastagir Gazi on Tuesday told media that the government was working to bring back the golden days of the jute sector.

“The government has taken various initiatives and projects to facilitate the production of multipurpose jute products for the development of the country’s jute sector,” he said.

Sources at the jute ministry said that the government is planning to establish a green jute factory in the outskirts of Dhaka under the authority of Bangladesh Jute Mills Corporation to produce export-quality jute products.

Bangladesh has successfully invented a new kind of poly bags from jute which is totally environment-friendly and commercially viable to replace hazardous polythene.

To produce this bag at a larger scale, the government has already signed an agreement with Futamura Chemical Ltd., a UK-based company, for producing ‘Sonali Bag’ commercially.

Sources at BJMC said this innovative product has huge demand around the world and it is possible to fetch around $1 billion from exports of Sonali Bag. About 500 billion pieces of polythene are being produced annually across the world. Polythene will be banned globally soon. Bangladesh will be able to capture the market by exporting ‘Sonali bags, said the market insiders.

The demand for jute bag is also increasing in the country as the government has made the use of jute bags mandatory for 19 products. In 2018, around 1.5 crore jut bags were used for packaging and the volume will be increased manifold in the government directives are followed strictly, said sector insiders.

Meanwhile, there has been a lot of discussions about the production and marketing of viscose yarn and fabric form jute for a long time. Bangladesh is already working with three companies based in Sweden and Finland. The companies have already examined the feasibility, quality and productivity of viscose fabric from Bangladeshi produced jute.

Sources at Jute Corporation said the result is positive and a Bangladeshi expert team would go to Finland to get the detailed results of the initiative.

Bangladesh Jute Corporation secretary AKM Tarek said that viscose fabric has huge demand around the world. If Bangladesh can produce this fabric, it will help bring huge foreign currency for the country.

He also said research is underway to assess the viability of producing viscose fabric viable.

In 2017-18 fiscal, the jute sector for the first time entered the billion-dollar club by exporting products worth at $1.02 billion, ushering in new hopes for this thriving sector.

During the six months of current fiscal year, jute and jute products exporters fetched around $421 million.