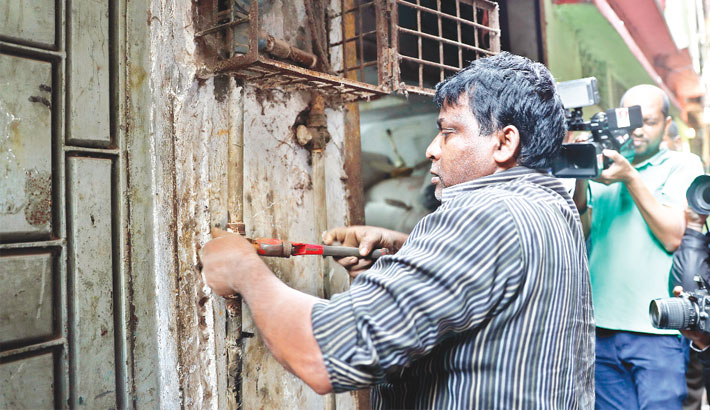 Dhaka South City Corporation (DSCC) on Thursday gave two days to the owners of chemical warehouses in Islambagh and Shahidnagar areas to relocate highly flammable chemicals from there.

The DSCC disconnected utility services, including gas, water and electricity lines, from 21 buildings in the two areas of Old Dhaka on the day for storing chemicals.

The DSCC team also threatened the warehouse owners with arrest if chemical stores are not relocated within the stipulated time, DSCC officials said.

During the drive in Islambagh of Lalbagh area, gas, water and electricity lines of at least seven residential buildings were cut off on charge of storing chemicals and the house owners were given two days ultimatum to shift chemical warehouses from their residential buildings.

Chief health officer Sharif Ahmed said, “The industries ministry has fixed two spots [Shyampur and Tongi] to relocate their chemical stores. As per the decision of DSCC taskforce, we earlier arranged miking to remove chemical warehouses from residential buildings.”

“We went to the area as per our previous announcement. We disconnected gas, electricity and water lines from the residential buildings where chemicals have been found,” Sharif said.

During the drive, a large number of local people flocked to the scene and spoke against the drive.

They said people in the area have been running chemical business for the last 400 years without any disruption.

Talking to the newsmen, president of Bangladesh Plastic and Packaging Roll Association Abu Motaleb said there is no flammable and risky chemical godown in the area.

“The warehouses don’t have 29 flammable chemicals. We have no objection regarding shifting of 29 identified chemicals. We will sit with FBCCI and DSCC on Sunday to discuss the issue,” he said.

On the other hand, chief waste management officer Zahid Hossain led another drive in Shahidnagar area and cut off lines of utility services of at least 13 buildings in the area.

During the drive, members of law enforcement agencies, WASA, Titas gas, DPDC and department of explosives were present.