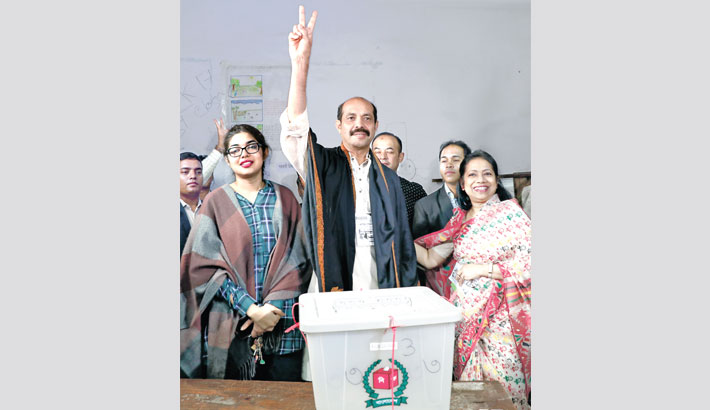 Ruling Awami League candidate Atiqul Islam has taken an unassailable lead in the mayoral by-election to Dhaka North City Corporation held on Thursday amid a low turnout of voters.

According to the Election Commission, businessman-turned-politician Atiqul bagged 631,418 votes and his nearest contestant Jatiya Party’s Shafin Ahmed got 29,553 votes in 1014 centres counted until 12:00 midnight out of the total 1,295 centres.

The balloting to elect the Dhaka north mayor and councillors in 36 new wards -- 18 in the two city corporations each in the capital -- continued from 8:00am to 4:00pm without any break.

The Election Commission and voters attributed the low turnout to the boycott of the polls by Bangladesh Nationalist Party and the inclement weather that affected the city life for the last three days.

The Commission, however, claimed that 50 per cent of the voters exercised their franchise in the peacefully-held election, but did not elaborate if the count is for mayoral by-election or for both mayoral and councillor polls.

No incident of violence was reported during the voting. The mayoral election was held on party line in DNCC for the first time.

Many voters, particularly those in the areas where councillor polls were held, said they exercised their ballots amid festivity and did not face any unpleasant situation.

“As only a few months are left before the expiry of the new mayor’s term in office, voters are less interested [in the polls]. The other reason is that all the parties are not participating in the polls,” he said.

Election Commission Secretary Helal Uddin Ahmed said the elections were held in a peaceful manner with no incident of violence being reported.

The turnout of voters is roughly about 50 per cent, he said.

Five contestants vied for the DNCC mayoral post vacated with the death Annisul Huq on November 30 in 2017 at a London hospital.

Though the by-election was supposed to be held within 90 days of his day, the polls were deferred on a verdict of the High Court.

The court on January 17 last year stayed the by-polls after hearing two writ petitions, filed challenging the legality of the schedule of the polls for the mayoral post and councillor position in 18 new wards under DNCC.

After suffering a humiliating defeat in the 11th parliamentary elections held on December 30, BNP decided to boycott any election under the Awami League government.

By-polls for councillor post in ward number 21 were also held on Thursday.