We are disappointed, says Tamim 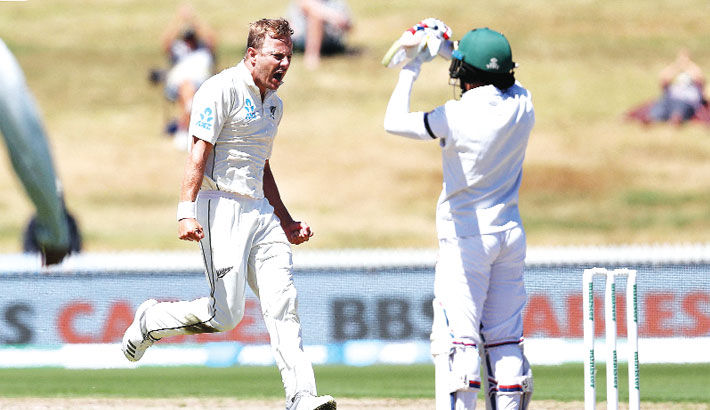 New Zealand pacer celebrates after taking a wicket against Bangladesh during day one of their first Test on Thursday.

Bangladesh opener Tamim Iqbal said on Thursday that the visitors are disappointed to not being able to make their start count against New Zealand in the opening Test at Hamilton.

Bangladesh were 121 runs for 1 wickets before lunch but lost eight wickets in the second and third session of the day to be dismissed for 234 runs despite a herculean Tamim Iqbal’s ninth Test century.

New Zealand added more misery as they got on top of their opponent by ending the day at 84 runs without loss to take a firm grip on the opening day.

“To be honest getting this kind of start was like a dream for us because normally in a greenish wicket we tend to lose two or three wickets early and everyone knows what follows next. But after getting such a brilliant start not to able to capitalise it, is disappointing. Not only me but everyone in the dressing room very disappointed,” Tamim told reporters at the post match press-conference.

“The wicket will be at its best tomorrow and the day after because whatever slowness and the double pace it had would vanish by then. So it was important that we bat the whole day,” he said.

“I thought it was a very good wicket. It was greenish but didn’t do too much. We should have scored lot more runs than what we have put on scoreboard. (At) End of the day we only have ourselves to blame. I thought if we could have batted the whole day, score somewhere between 350 to 400 runs, then it could have been a decent total,” he said.

“They were bowling well but in patches. If you see our dismissals, you will find that we were not dismissed by brilliant deliveries rather we were out playing wrong shots which helped them earn success by executing their plans,” he added.

Tamim said that he was happy that he could execute his plans of ducking against Neil Wagner who picked a fifer with his barrage of short balls and added that he was determined to hit the ball if it was pitched in his zone.

Tamim made 126 runs with the help of 21 fours and a six to justify his claim.

“I just batted long enough I think. I had a very clear plan. The plan was, if there was any room in the ball, I will try to hit it. Luckily I got few boundaries early and kept on batting the way I like to bat,” said Tamim.

“Every individual should have plans. I have some plans while others have different plans. I think we made a mistake all of a sudden after doing well. We all know what Wagner does because he is been doing it for the last four or five years. But how will tackle you him depends on you. Some like to play pull shots while ducking is a better option for some. For me ducking was the option so I kept on ducking,” he concluded.