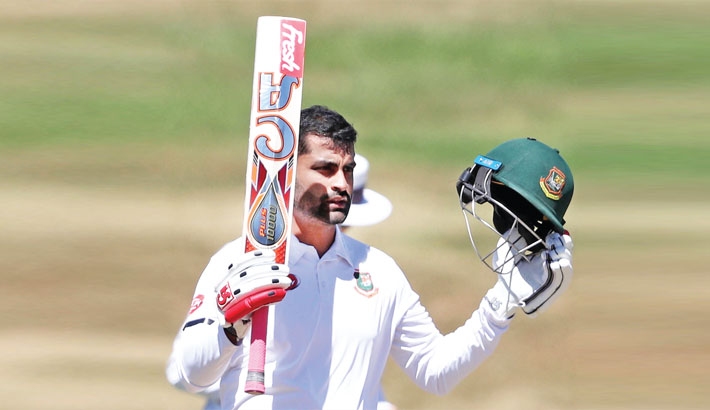 Bangladesh opener Tamim Iqbal celebrates after scoring a century during day one of the first Test of the series against New Zealand at Seddon Park in Hamilton on Thursday.

Tamim Iqbal’s breezy hundred failed to stop New Zealand from taking control of the first Test against New Zealand as Neil Wagner’s five-wicket haul helped them make a strong comeback on the opening day at Hamilton on Thursday.

Tamim struck a 128-ball 126-run knock, with 21 fours and a six, to provide a superb platform for the visitors, who squandered it by losing wickets at regular intervals to be bowled out for just 234 runs.

Jeet Raval then led New Zealand’s reply with a half-century and was well-supported by Tom Latham in an unbeaten 86-run stand as the hosts ended the day’s play trailing by just 148 runs.

It was heartbreak for debutant Ebadat Hossain in his very first over as he found the outside edge of Tom Latham’s bat but Soumya Sarkar put down the catch at second slip. Ebadat and Abu Jayed were on the mark as far as their line and lengths were concerned, keeping New Zealand openers in check for the first few overs. But as the innings progressed, they were guilty of straying on the pads and were made to pay as Jeet Raval picked up a few boundaries to help New Zealand off to a solid start.

Raval also appeared comfortable against the medium pace of Sarkar and the spin of Mehedi Hasan Miraz, finding the fence regularly to keep the scoreboard on the move. Latham, who took his time to settle down, decided to take on Mehedi for a couple of boundaries as the openers raised a half-century stand in the 16th over.

A short while later, Latham took full toll of a short ball from Mehedo to dispatch it over the mid-wicket boundary for the first six of the innings. Latham remained unbeaten with Raval, who registered his eighth Test fifty, as they extended Bangladesh’s wait for their first wicket.

Earlier, Kane Williamson’s decision to bowl first on a greenish Seddon Park track, didn’t translate into early wickets with the pacemen not finding much help from the pitch. Tamim scored as many as six fours in the first ten overs, playing on the up on a few occasions with minimum movement off the pitch and in the air.

Tim Southee, with his outside-off lines, was hoping for an outside edge but there weren’t any as Tamim managed to put them away easily through the cover region. Shadman Islam provided solid support from the other end before he played down the wrong line to a full delivery from Trent Boult to be bowled for 24 runs. There was no stopping Tamim though, as he struck 3 fours on the trot off Boult to register a 37-ball fifty, with Bangladesh managing 80 runs in the first hour.

Colin de Grandhomme created an opportunity when he got the opener early into a drive, only to put down a simple catch off his own bowling. With New Zealand persisting with their outside-off lines, Tamim continued to make merry with his cover drives as he powered Bangladesh past 100 runs in the 20th over. Mominul mostly played second fiddle in the second-wicket stand worth 64 runs before Wagner’s short-ball tactics paid dividends as he got the No 3 to glove one to the keeper just before the lunch break to lay the platform for New Zealand’s fightback.

Tamim’s love affair with the off-side boundary extended into the second session as well, with Southee again feeling the brunt of his attack. The left-hander also handled Wagner’s short-ball ploy well, bringing up his ninth Test ton with an authoritative pull. But Mohammad Mithun wasn’t as good as Tamim with his execution, getting a top-edge off an attempted pull to give Wagner his second wicket. Southee also tasted some success, as Sarkar’s casual attempt to leave a ball from the right-arm pacer ended up in the batsman getting a glove through to the keeper.

New Zealand continued to make incisions, with Tamim’s stay coming to an end midway into the second session, he steered a de Grandhomme delivery straight to Williamson at gully. Mahmudullah Riyad and Liton Das managed to keep the bowlers at bay for a while before Wagner accounted for the Bangladesh skipper and Mehedi with short balls ahead of the tea interval. Southee added 2 more wickets to his tally in the final session while Wagner picked up the last wicket, dismissing Liton Das with yet another short delivery to finish with a five-wicket haul.