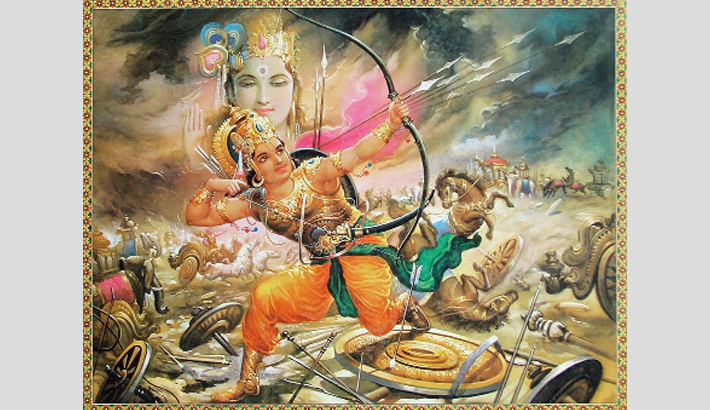 Among hundreds of characters in Mahabharat, an Indian epic, Abhimanyu is a very bright one. Though a teenager, he was a great warrior and played a very important role in Kurukshetra war. He was born to Arjun and Subhadra. Though not born from her own womb, Draupadi loved him more than her own sons.  She once said that if Pandavas were not willing to wage war, then her sons, led by Abhimanyu, would attack the Kauravs and get justice for her because she could never forget how she was insulted by the Kauravs in open court. Abhimanyu was the reincarnation son of Chandradev (moon god).

Like Arjun, his father, Abhimanyu was also known  by some other names such as  Arjunaputra (son of Arjun or the  true successor of Arjun), Subhadranandan (son of Subhadra), Soubhadri (son of Subhadra), Chandraputra (son of Moon god), Krishna Shishya (disciple of Lord Krishna), Rudradhari (one who possessed the mighty bow named Raudra which was given by Lord Krishna) etc.

Abhimanyu spent his childhood in Dwaraka with Subhadra  and  Lord Krishna and was brought up under the guidance of Lord Krishna and Balram (elder brother of Krishna). He was trained by Pradyumna, son of Sri Krishna and by his great warrior father Arjun. In fact, his education began before birth i.e. while he was still in his mother’s womb. He overheard Arjun telling Subhadra the secrets of entering and destroying enemies and breaking various battle formations. Among those he only heard the secret of entering into the Chakrabyuha (a particular strategy of accumulating soldiers during war in is similar to a wheel) but as meanwhile Subhadra fell asleep Arjuna could not complete his explanation and Abhimanyu could not know the techniques of exit and this lacking brought pathetic end to his life in Kurukshetra war.

Abhimanyu played an important role in Virat Parba. One day Kichak, who tried to insult Darupadi, was killed by Bhim. Knowing it Duryodhan surmised that Bhim might be the killer of Kichak because other than Bhim no one had that physical strength to kill Kichak and became almost certain that the Pandavas were hiding in Matsya Kingdom. To take revenge of Kichak’s death Kaurav warriors attacked Matsya Kingdom apparently to steal their cattle but in reality, Durjodhan’s intention was to pierce the Pandavs’ anonymity. In the meantime Susharma attacked Matsya kingdom. Uttar, son of King Virat, attempted to lead the army against the Kauravs.  At the same time Draupadi was kidnapped by Kichak’s 100 brothers. Bhim, Nakul and Sahadev went out in search of her. In such a chaotic situation Yudhishti  asked  King Virat to stay in palace and defend the kingdom by sending his soldiers to battlefield. Abhimanyu then led the Matsya army and defeated Susharma.

On the other hand it was necessary to protect Matsya Kingdom from the army of Duryodhan.  Being suggested by Draupadi, Uttar (son of King Virat) took Britannia (in fact Arjun in disguise) with him as his charioteer but looking at the Kaurav army, Uttar lost his nerve and attempted to flee. Then Arjun revealed actual identity of himself and of his other brothers. Naturally, Uttar got astonished and felt delighted.  Out of sense of gratitude to King Virat and to protect the Matsya Kingdom, Arjun took up the Gandiv (his grand bow) and Devdatta (the conch shell) giving Uttar the responsibility of his charioteer Arjun faced the  Kaurav Army. They attacked Arjun simultaneously but all of them were defeated by Arjun repeatedly.

Exile of the Pandavs ended and as per condition Duryodhan was bound to give the Pandavs their kingdom back but he violated the condition. The Pandavs demanded only five villages for five brothers but Duryodhan did not agree with them and declared that even amount of soil contained at a needle’s end would not be spared without war. In this way the War of Kurukshetra began and there we find the warrior Abhimanyu again.

During anonymity period the Pandavs stayed in the palace of Virat, the Matsya King. Five brothers were engaged in different works having pseudonyms. Arjun, though a great warrior, adopted the name Brihannala and was employed as dance teacher of princess Uttara, daughter of King Virat. After the war king Virat was very much pleased with Arjun and he offered Arjun to marry Uttara  but Arjun  declined the proposal on the ground that  a student is just like a child to a teacher. He placed an alternative proposal to accept Uttara as his daughter-in-law. King Virat gladly agreed with Arjun and accordingly marriage between Abhimanyu and Uttara was duly solemnised.

On the very first day of the War of Kurukshetra, Abhimanyu faced Bhishma (grandfather of both the Pandavs and Kauravs) and got involved in archer duel with him. The battle was so fierce that both of them were almost equal. The next day Abhimanyu attacked Ashwatthama. When Dron heard that his son was attacked by Abhimanyu he immediately rushed to save his son. Dron and Abhimanyu were soon engaged in an intense battle and in this opportunity Arjun  and Bhima made way to reach Duryodhan and kill him but due to some reasons their plans failed. On the other side of the battlefield Dron also failed to defeat Abhimanyu.