PM’s upcoming German visit to be a milestone: Quader 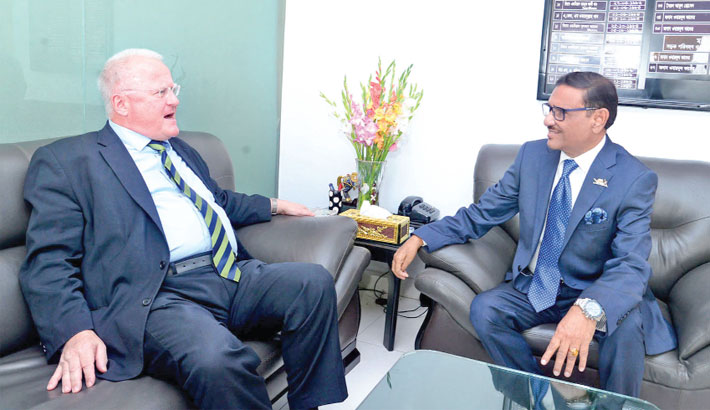 German Ambassador to Bangladesh Peter Fahrenholtz calls on Road Transport and Bridges Minister Obaidul Quader at the Secretariat office in the capital on Tuesday. -SUN PHOTO

Road Transport and Bridges Minister Obaidul Quader on Tuesday said Prime Minister Sheikh Hasina’s upcoming visit to Germany is likely to be a milestone in taking the relations between the two countries to a new height.

The minister came up with the remark while talking to German Ambassador to Bangladesh Peter Fahrenholtz in a meeting at the Secretariat in the capital.

The minister said a new door of possibility might be opened in the upcoming Munich Security Conference between Prime Minister Sheikh Hasina and German Chancellor Angela Merkel.

In the meeting, the PM might seek assistance for implementing mega projects and more German investment in the country, he said.

Extending thanks to the German government for hailing the newly-elected government of Bangladesh, Quader said Germany has its strong faith in PM Hasina’s dynamic leadership.

The German government wants to help Bangladesh improve its governance, the rule of law and strengthening democratic principles, he said.

The German envoy also emphasised the need for enhancing relations between two the countries.