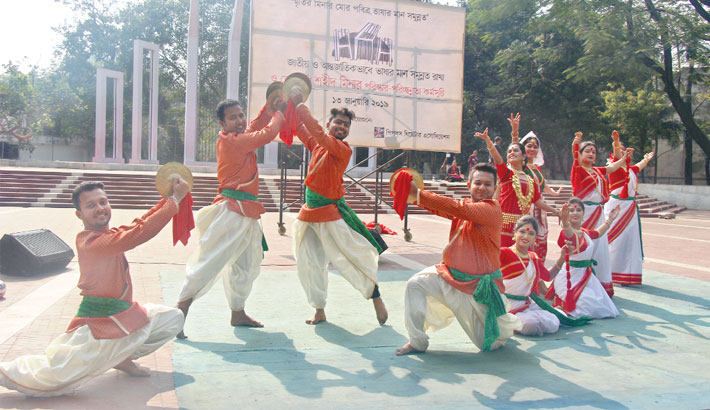 Bangladesh Shilpakala Academy (BSA) in association with People’s Theatre took a noble initiative to keep the surroundings of all the Shaheed Minars in the country clean and beautiful.

With the slogan ‘Smritir Minar Mor Pobitro, Vashar Maan Shomunnoto’, they arranged a cultural and a cleaning programme at Dhaka Central Shaheed Minar on January 13 in order to raise awareness among all with this respect.

A children’s theatre workshop was also held as a part of the programme.

More than five hundred children from different cultural and educational institutions of different districts including those of Bangladesh Shilpakala Academy and People’s Theatre Association joined the cleaning programme.

After the performance of songs, the cleaning activities began in participation of the children. Followed by the activity, drawing and dance events were also held there.

At 2 p.m. a workshop on children’s theatre took place at the National Theatre of BSA, which was also conducted by Liaquat Ali Lucky.