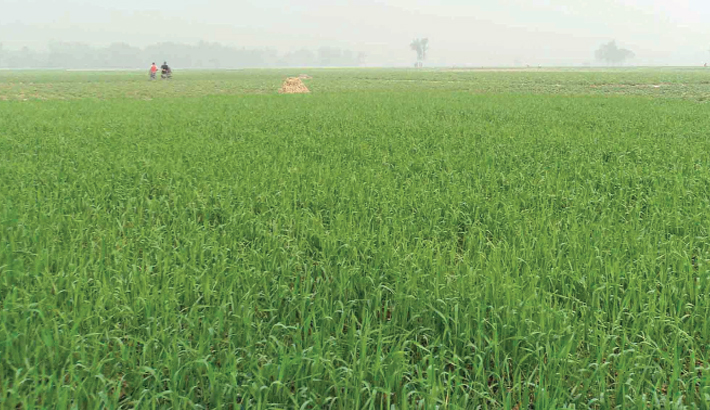 BOGURA: Farmers and others concerned, including agriculturists, are very much hopeful about the overall wheat production during the current season in Bogura district including 12 upazilas particularly the vast char area.

According to Department of Agriculture Extension (DAE) office source timely plantation of seeds accompanied by the current cold spell, is being considered as a positive sign for attaining bumper production of the cash crop.

The farmers of the district were found more confident in wheat farming on more new lands, due to the water-stress condition, as wheat is a less-water consuming plant.

Wheat Research Center has so far released 24 varieties of wheat for commercial cultivation. The recently released six varieties including prodip, bijoy, shatabdi and BARIGAM-26 are more tolerant to leaf blight and leaf rush-disease with additional advantage of higher yield.

The authority concern has developed projection plots on around 600 hectares of farmers’ field in the area for boosting seed production of the latest varieties during the current season, besides various other motivational campaigns and training programmes.

Farmers have cultivated wheat on around 2300 hectares of land against the target of 70 lakh hectares fixed by the Department of Agriculture Extension in Bogura districts in Rajshahi division showing enhancement of 70 percent than the target.

Sub-assistance agriculture officer said wide-range promotion of the newly innovated variety could help increase wheat yield. He opined that there is no alternative to promoting modern technology and using high yielding wheat seeds to reduce dependency on food import to meet the internal demand.