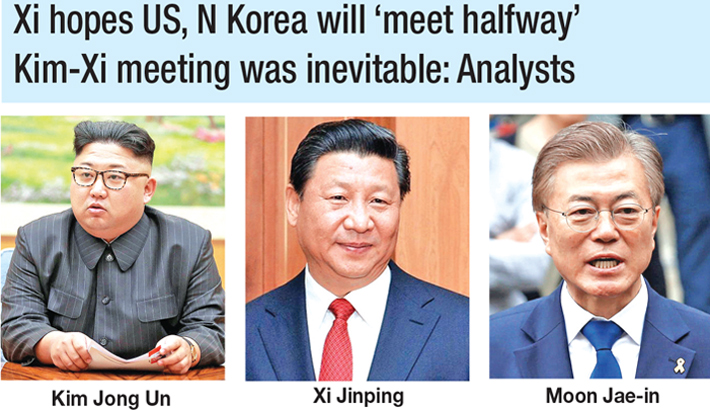 “Corresponding measures must be devised in order to facilitate North Korea’s continued denuclearisation efforts,” he added, such as the US agreeing a “peace regime” and formally declaring an end to the 1950-53 Korean War.

The North has repeatedly pledged to work towards “denuclearisation of the Korean peninsula”, a vague term that could be taken to also include US forces in the South and in the wider region.

Moon acknowledged that the agreement North Korean leader Kim Jong Un and US President Donald Trump signed at their first summit in Singapore was “somewhat vague”.

He also said there was “scepticism” that Kim’s “concept of denuclearisation” will be different from that demanded by the US.

“But Kim has assured many foreign leaders, including myself, Trump, Xi Jinping and Putin, that his concept is no different in any way from what the international community demands,” Moon told reporters at the Blue House in Seoul.

Meanwhile, Chinese President Xi Jinping offered North Korean leader Kim Jong Un firm backing in deadlocked nuclear talks with the United States, insisting the two sides should meet “halfway”, state media said Thursday. Kim visited Beijing by train this week for two days of discussions that reasserted China’s role in the process, and were seen as a strategy session ahead of a second summit between the North Korean leader and US President Donald Trump.

At their first meeting in Singapore in June, Kim and Trump signed a vaguely worded document with Kim pledging to work towards the “denuclearisation of the Korean peninsula”.

But progress has since stalled with Pyongyang and Washington—which stations 28,500 troops in South Korea—disagreeing over what that means.

North Korea wants relief from the multiple sets of sanctions imposed on it over its nuclear weapons and ballistic missile programmes, while the US wants the measures to remain in place until Pyongyang gives up its arms—something it has made no public promise to do.

On the other hand, By hosting North Korean leader Kim Jong Un for a fourth time, China has signalled again that it will not be sidelined in the diplomatic dance between its Cold War-era ally and Washington.

With another nuclear summit looming between Kim and US President Donald Trump, a meeting between President Xi Jinping and the North Korean leader was inevitable, according to analysts.

It has become something of a ritual: Last year, Kim briefed Xi before and after his historic summits with Trump and South Korean President Moon Jae-in. China, which wouldn’t want to be left out in the cold in any settlement, has worked to improve relations with its neighbour, which deteriorated after Beijing backed UN sanctions against North Korea.

While Beijing has been angered by Kim’s nuclear tests, it would not be happy to see its decades-old ally move closer to the United States at China’s expense.