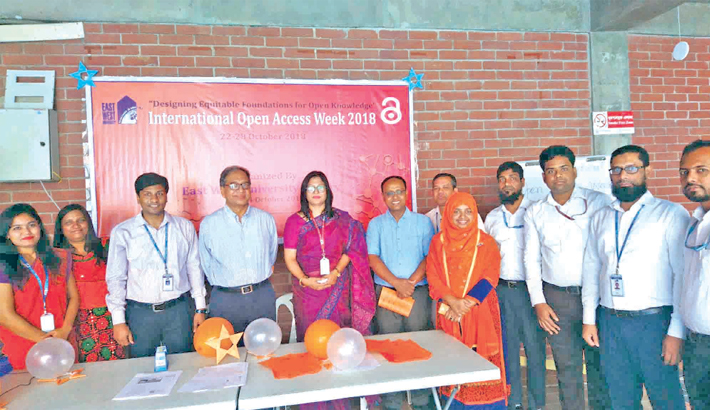 International Open Access Week is a global, community-driven week of action to open up access to research. The event is celebrated by individuals, institutions and organisations across the world, and its organisation is led by a global advisory committee. This event was launched by Scholarly Publishing and Academic Resources Coalition (SPARC) and partners in the student community in 2008.

This year’s theme reflects a scholarly system in transition. Every year, EWU Library organises different events to celebrate this week. This year, EWU Library observed the week with a series of programmes including awareness building campaign and quiz competition. The quiz competition was made up of 10 sessions and around 55 students participated in this competition. They were very eager to learn all the facts about open access and how to put it to practice in their academic life.

Pro Vice Chancellor, Professor Dr. Fakrul Alam and a couple of respective Chairpersons have visited the campaign booth. They appreciated this approach and mentioned that this is an effective way to raise awareness on this issue among university community. They also added that this is the first time that any such event has been organised by an academic library in Bangladesh.