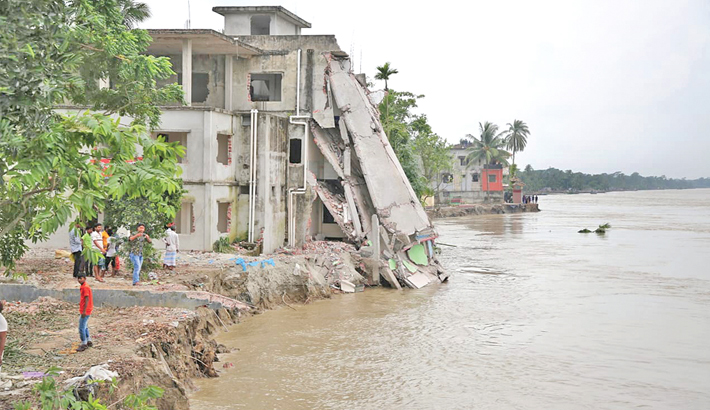 The river Padma devours a building in Naria upazila of Shariatpur district. Erosion by the river has taken a serious turn in the area recently. The photo was taken on Tuesday. — sun photo

Erosion by the Padma river has devoured over 4,500 houses and many establishments in Naria upazila under Shariatpur over the last few months, rendering thousands of people homeless.

The affected people have shifted to the capital and adjoining districts. Many of them have taken shelter on the premises of local hospitals and clinics and other places.

Some 600 business establishments, several schools and mosques in five unions of the upazila have been devoured by the river, officials at Upazila Parishad said.

The erosion-hit people called upon the authorities concerned to immediately construct an embankment along the river to protect them from the erosion.

They also demanded that the government declare Naria upazila a disaster zone.

About 12 buildings belonging to different hospitals and clinics are now under threat of the river erosion.

Local people said they would need two hours to reach the bank of the river on foot three years ago, but the river is now very close to their houses.

A1.50km area from Naria Banshtola to Purba Naria was washed away by the river in the last couple of days.

Though the erosion has been continuing for the last three years, the local administration is yet take any step to build an embankment, locals alleged.