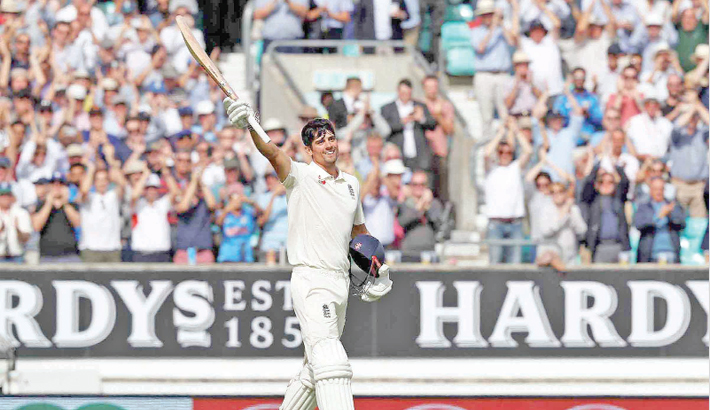 England batsman Alastair Cook celebrates after scoring a brilliant hundred during play on the fourth day of their fifth Test against India at The Oval in London on Monday. — AFP Photo

Alastair Cook scored his 33rd Test century on Monday in his farewell international match at the Oval, bringing the curtain down on a record-breaking England career in style.

Cook, who scored 71 in the first innings of the fifth Test against India, reached his century off 210 balls.

He reached the mark in dramatic fashion when he scampered a single only for Jasprit Bumrah’s throw to flash across the ground and over the boundary rope for four overthrows. Cook removed his helmet and raised his arms as the Oval crowd went berserk, giving him yet another standing ovation.

The opener is retiring from international cricket with a stack of England records to his name including most Test appearances, most runs and most centuries.

The Essex batsman, 33, who scored a hundred on his Test debut, has scored over 3,500 runs more than the next Englishmen on the all-time list, his mentor Graham Gooch.

Cook, who will continue to play for Essex, came to prominence in 2005 when he scored a double hundred for his county side against Australia.

He skippered England to home Ashes series wins in 2013 and 2015 and it is hard to imagine England’s 3-1 Ashes success in 2010-11 — their only series win in Australia in the past three decades — without Cook’s mammoth tally of 766 runs.