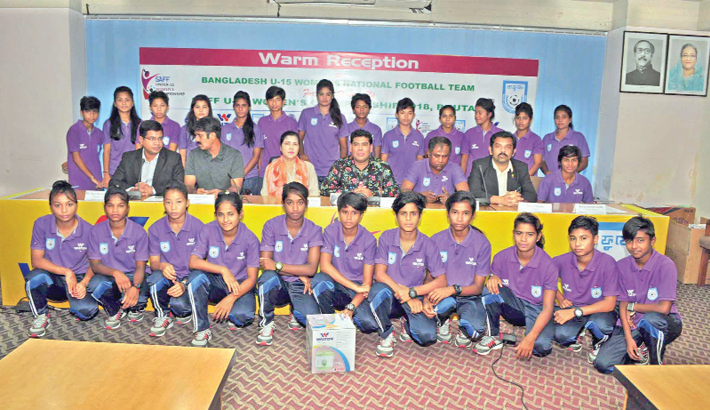 Players of Bangladesh U-15 Women National Football Team pose for a photograph along with organisers and BFF officials during a reception ceremony at Bangladesh Football Federation (BFF) conference room on Monday. — BFF Photo

Bangladesh U-15 women’s football team, which finished runners-up in the recently concluded SAFF U-15 Women’s Championship, was given a reception at Bangladesh Football Federation (BFF) conference room on Monday, reports BSS.

Sponsors of the team, Walton Group, arranged the reception along with the BFF to praise the team’s outstanding performance at the SAFF tournament which took place in Thimpu, Bhutan from August 9-18.

Walton Group head of games and sports Iqbal Bin Anwar handed over the Walton home appliance to each member of the team.

In their first match on August 9, Bangladesh came the limelight with a drubbing 14-0 victory against Pakistan.

On August 13 at the Changlimithang Stadium, the girls in red and greens scored three goals against Nepal with a clean sheet.

On August 16, the hosts Bhutan met the same fate against Bangladesh as they lost 5-0.

The girls dominated the tournament with 22 goals in just three matches, but could not repeat the same against India in the finals as they lost 1-0.