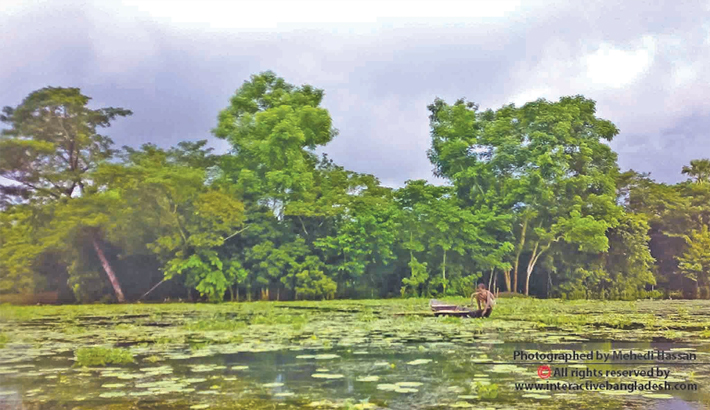 The original image of Lakshmipur terrain was not the same as it is now. This land was once part of the Bay of Bengal. In famous Chinese traveler Hiuen Tsang's travelogue 'Siuati', in the 'Raghu Dynasty' of poet Kalidas as well as in the observation of Scottish traveller Dr. Francis Buchanan, the description of Lakshmipur of that time was found. As most of the land in Lakshmipur district is river bed or isles sedimented from the river or the Bay of Bengal, the names of different areas of the district are named adding suffixes like ‘Chor’, ‘Dee’, ‘Di’, ‘Dia’- meaning river bed.

While this vast land of Lakshmipur kept emerging from the ocean, people from different parts of the country came to cultivate and settle whereas foreigners of Arab countries came in to promote trade and religion. Since then, people of Lakshmipur have survived by fighting in the eroding Meghna River and in adverse nature. In the course of time, many known as well as unknown areas of coastal lands, river beds, settlements and city ports previously found in the description of Ibn Battuta, went extinct in face of erosion.

Lakshmipur was under the territory of Bhulua in the thirteenth century. Fakhruddin Mubarak Shah won Bhulua in the mid-fourteenth century. Here he established the eastern capital and a strong naval base was set up to protect the coastal border of Meghna. In the seventeenth century, the Mughals captured Bhulua. In the Mughal era, that naval base got the name 'City Kasba'. During the reign of Emperor Shahjahan in the seventeenth century, Subedar Shaista Khan of Bengal marked the southern and western boundaries of Lakshmipur district.

During the colonial rule of East India Company, Lakshmipur was known for its salt and textile industries. The people of Lakshmipur participated in Swadeshi Movement spontaneously. During that time Mahatma Gandhi visited this region. Lakshmipur Judge Court was established in 1870. The judge and the lawyer class tried to build up Lakshmipur as a city. They established an English school (Lakshmipur Model High School) in Lakshmipur, Public Library and Town Hall, Bani Rangoli Auditorium and Bar Library.

Rebel poet Kazi Nazrul Islam visited Lakshmipur in June 1926. In 1971, during the Great War of 1971, seven battles took place between the Pak army and the freedom fighters.  There are three mausoleums, two mass graves and one genocide centre.

The transformation in administrative history of Lakshmipur is noteworthy. The first police station of Lakshmipur was established in 1860. Then in September 1, 1976, the 5th Banchanagar union was transformed into Lakshmipur municipality. After this the municipality was expanded. Lakshmipur subdivision was formed compiling Raipur, Ramganj, Ramgati and Lakshmipur Sadar upazila on 19 July 1979. With the same area, Lakshmipur district was formed later on February 28, 1984. Kamalnagar was turned into an Upazila dividing Ramgani upazila into two. Currently, Lakshmipur district is divided into 5 subdivisions compiling 58 unions and 4 municipalities; having 474 mouzas and 547 villages within an area of 1,534.7 square Kilometres.

You need to come to Jhumur bus stand in Lakshmipur district from any part of the country. Then you will find mini buses or CNG auto-rickshaws to reach Hazir Hat Bazar and take a rickshaw or CNG to get to the bank of Meghna at Char Folkon union. Meghna is a source of shiny hilsa fish, one of the major centres of activities of thousands of fishermen. The Dhaka-Chittagong maritime shipping navigation is carried out through this very part of Meghana at Char Folkon union. People of Bhola and Barisal districts navigate to Lakshmipur through this route. The fishermen's fishing activities are very pleasing to watch. The roaring waves and tides of Meghna never seize to amaze us.

This landlord house is located near Dalal Bazar. Landlord Rajendra Nath Das, his son Khetranath Das and grandson Jadunath Das and the son-in-law of Jadunath Das, Harendra Narayan Das Chowdhury had carried out the role of a landlord. Raipur upazila was their territory. Because of the familiarity with the landlords of the Dalal Bazar, they opted to set up an establishment purchasing some land property.  There is a little canal; a two storied Puja Mandap, a dormitory for lathiyal and guards right beside the entrance. The palace is very beautiful inside. There are many fascinating stories regarding an underground dance and aristocratic rooms called ‘Adhar Manik' inside the house.

Raipur Fish Hatchery and Training Centre is a fish hatchery in Raipur Upazila in Lakshmipur District. It is one of the six main fish hatcheries in Bangladesh; it was the largest hatchery in the district during the Noakhali Rural Development Project implemented during 1978-1992 by DANIDA, a Danish development agency. The Raipur Upazila has 8 fish farms, 14 dairy farms, 72 poultry farms and this one hatchery. As of 2017, this government-owned hatchery was able to produce more than a thousand kilogram of fish prawns a year, which mostly consisted of endemic species like Catla catla (katla), Labeo rohita (rui), Cirrhinus cirrhosus (mrigal), Labeo calbasu (kalabaus), Clarias batrachus (magur), and Channa striata (shingi).

This institute provide people with training and research facilities in fish breeding, setting up of hatcheries and fish firms. CNG auto-rickshaws are available from Lakshmipur bus stand to take you there.

These two isles on the bosom of Meghna are calm, quiet and beautiful. People come here to cultivate from the surrounding villages. It’s ideal to spend an afternoon here. Boats and trawlers are available from Char Alexander to go to Teliyar Char and Char Gazaria.