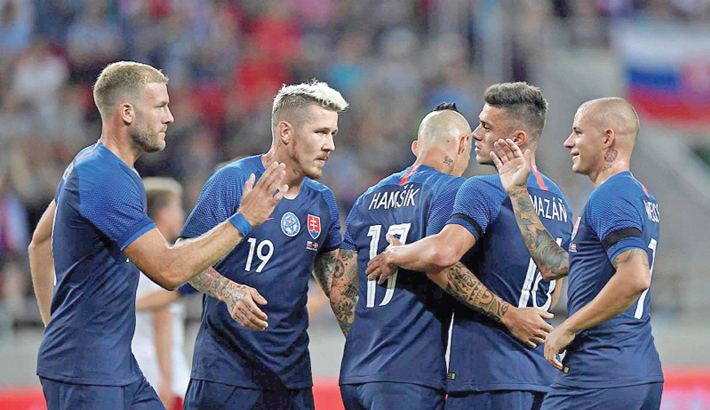 Players of Slovakia celebrate after scoring a goal against Denmark during their international friendly match at Anton Malatinsky Stadium in Slovakia on Wednesday. Slovakia won 3-0.

Denmark’s ragtag bunch of lower league footballers, futsal players and warehouse workers were beaten but not embarrassed in their friendly away in Slovakia on Wednesday night, report agencies.

With Christian Eriksen, Kasper Schmeichel and the rest of the country’s stars absent due to an incredible row over image rights, and former Arsenal midfielder John Jensen drafted in at late notice to manage a squad of entirely uncapped unknowns, expectations were low in Trnava.

The floodgates threatened to open after an 11th minute strike from Adam Nemec. But a goal before half-time from Albert Rusnak before substitute Adam Fogt, a futsal-playing political science student, put through his own net in the closing stages saw them leave with just a 3-0 defeat.

Christian Offenberg, a salesman, started up front and captained the side, with student Simon Vollessen, who operates in the fourth tier of Danish football at right-back.

The outfield XI was made up entirely of players in the third or fourth tier, with  Christoffer Haagh, who represented Denmark at the Futsal Euros last year, replacing Schmeichel in goal, who saved a penalty from Luka Modric in their last competitive match at the World Cup in July.

Whether the rookies will be required for Sunday’s Nations League fixture against Wales in Aarhus remains to be seen, though it would need a resolve to the impasse between the Danish FA (DBU) and the players.

The DBU have an obligation to fulfil their upcoming Nations League fixtures, but with no manager or first-team squad they have had to bring in alternatives at the eleventh hour this week. Regular manager Age Hareide, who led Denmark to the last 16 of the 2018 World Cup, has been temporarily relieved of his duties on the premise that he has not picked this makeshift squad.

The stars have refused to sign a new national team agreement in a dispute with the DBU over commercial rights, with Eriksen’s personal situation part of the conflict, as reported by Sport Witness and TV2.

It is understood the Tottenham man is the part-owner of an energy drink firm, with his name and image being used to promote the brand. That is in conflict with Carlsberg, Denmark’s main sponsor, who also produce their own energy drink.