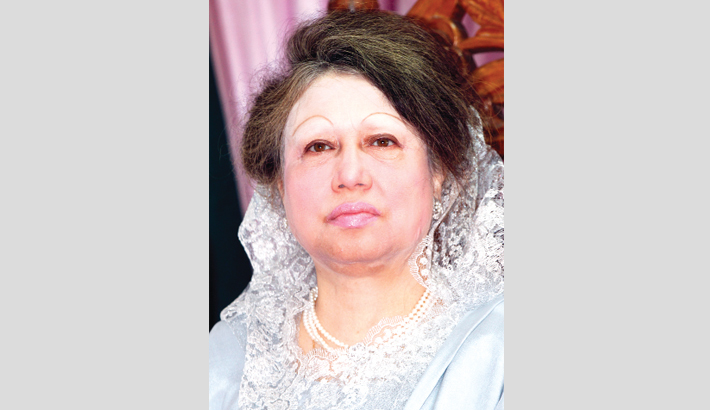 She told the court: “As I am very sick, I cannot come to the court again and again. You have already conducted my trial and you are still doing it. You can punish me for as many days as you want. I cannot come here again. I know this court will not deliver fair justice.”

The BNP chief told this after appearing before Dhaka Special Judge’s Court-5 during a hearing in Zia Charitable Trust graft case amid tight security in and outside the court.

Clad in a pink sari and sunglass on her eyes, the BNP chairperson entered the court on a wheelchair around 12:24pm and she was seen having difficulty to move her left hand.

She said: “My legs swell if I keep sitting here (on wheelchair) for long.”

The makeshift court was set up inside old Dhaka Central Jail on Nazimuddin Road where the BNP chief serves five-year jail term on her conviction in Zia Orphanage Trust graft case on February 8.

She said: “The decision to shift the court was taken a week ago. Then, why the gazette notification was issued on Tuesday? There is no justice; the trial is going on as per their desire.”

Replying to query on her health condition, Khaleda told journalists that her left foot and hand were almost been paralysed. Telling this, she left the courtroom along with her housemaid Fatema.

At the beginning of hearing, public prosecutor (PP) Mosharraf Hossain Kajol told court: “The case is now at the stage of argument.”

Requesting court for starting hearing, he said that he had already informed Khaleda’s lawyers about transfer of court.

However, no lawyer of Khaleda Zia was present during hearing. But, a pro-BNP lawyer, Gulam Mostafa Khan, also the president of Dhaka Bar Association, was present there.

He told court: “I have come here as an observer. Defence lawyers could not appear before court to represent her (Khaleda), because they were not informed properly about shifting of court.”

Criticising atmosphere of the newly-set up makeshift court inside the old jail, Gulam Mostafa urged the court for adjournment of hearing.

Two other accused—-Ziaul Islam Munnan and Monirul Islam Khan—appeared before court while another accused, Harris Chowdhury, political secretary to the then PM Khaleda Zia is on the run.

After 20 minutes of hearing, Judge Md Akhtaruzzaman adjourned hearing till September 12 as the defence lawyers were not present for placing arguments in the case. The court also extended bail to three accused until next date.

A total of 32 prosecution witnesses (PWs) testified before court. Earlier, the court fixed Wednesday for placing arguments of defence lawyers in the case.

She was not produced before the makeshift court at Bakshibazar for long time on health ground.

Finally, the Ministry of Law on Tuesday issued a gazette notification saying proceedings in the case will now be held at old Dhaka Central Jail. They also said the decision was taken considering Khaleda Zia’s security.

The Anti-Corruption Commission (ACC) filed Zia Charitable Trust graft case against Khaleda Zia and three others with Tejgaon police station in August, 2011 on charges of abuse of power and fundraising for the Trust from unknown sources.