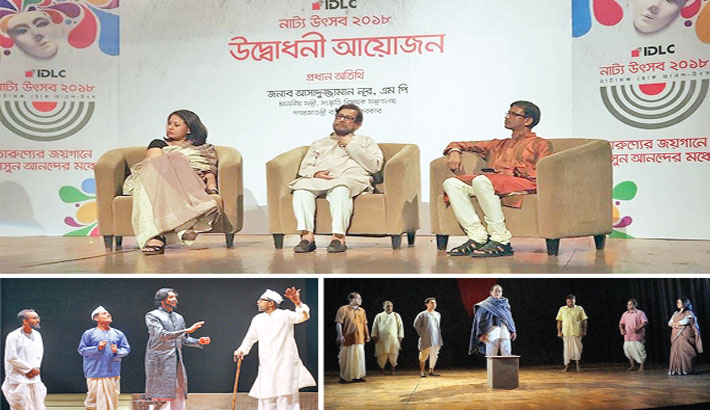 A five-day theatre festival began in the Bangladesh Shilpakala Academy (BSA) in the capital on Tuesday.

The festival has been organised by Industrial Development Leasing Company of Bangladesh Limited (IDLC).

With the slogan ‘Tarunyer Joyogane Asun Anonder Monche’, the festival titled ‘IDLC Natya Utsab 2018’ will feature 10 plays by the same number of troupes.

Cultural Affairs Minister Asaduzzaman Noor inaugurated the festival as chief guest on yesterday at the National Theatre Hall of BSA, where along with prominent playwrights, theatre artistes and activists, chief executive officer and managing director of IDLC Arif Khan were among others present in the inaugural ceremony of the event.

A total of 10 prominent theatre troupes will participate in the festival.

‘IDLC Natya Utsab 2018’ began with staging of ‘Hasonjaner Raja’, a much-acclaimed production of theatre troupe Prangonemor, at the Experimental Theatre Hall of BSA yesterday evening. Written by eminent writer Shakur Majid and directed by Ananta Hira, the play is based on the story of mystic poet and Zamindar Hason Raja.

On the other hand, yesterday, on the opening day of the festival, Theatre and Performance Studies Department of Dhaka University staged Nobel Literature Maxim Gorky’s play ‘The Lower Depths’ at the National Theatre Hall of BSA at 8:30pm.

‘Trial of Surya Sen’ is the 38th production of Dhaka Padatik, composition and direction of Masum Aziz is based on the anti-British movement.

The main characters of the drama are Surya Sen, Pritilata, Kalpana Dutta, Ambika Chakravarti, Lokenath Bal, Nirmalsen while 40 other characters will be seen in this play.

Surya Sen, who is noted for leading the 1930 Chittagong armoury raid in Chittagong during the British rule. Sen was a school teacher by profession and was popularly called as Master Da.

The play begins with Masterda Surya Sen’s trial in progress in a court room. A lawyer questions Surya Sen about the activities of anti-British revolutionaries as he stands in front of the judge. As the play moves forward the audience gets a glimpse of the anti-British movement in Chittagong in 1930s.

On the other hand, today, Theatre group Palakar will arrange the show of ‘Banglar Mati Banglar Jol’.

Based on Rabindranath Tagore’s “Chhinnapatra,” the play has been written by Syed Shamsul Haq and directed by Ataur Rahman.

In the story, Tagore as the protagonist describes the beauty of nature and lifestyle of people in different areas of the then East Bengal, now Bangladesh.

He reminisces the period from 1889-1895, “the most productive period of my literary life” as described by the polymath. He wrote on riverine beauty and greeneries of Bangladesh during this period.

The play also describes how he was influenced by bauls and their philosophy.

The play upholds Tagore’s observations and feelings expressed to his nice Indira Devi. The play is also a description of the scenic beauty of the countryside through Tagore's perception, and articulates how the poet was moved by the openness of the rural people and the mystic songs of Lalon.

Stage lights of the production have been designed by Nasirul Haque Khokon while Lucy Tripti Gomes has directed costumes of the play. Aniket Paul is the set designer and choreographer of the play.