A Non-Euclidean View of Dhaka City 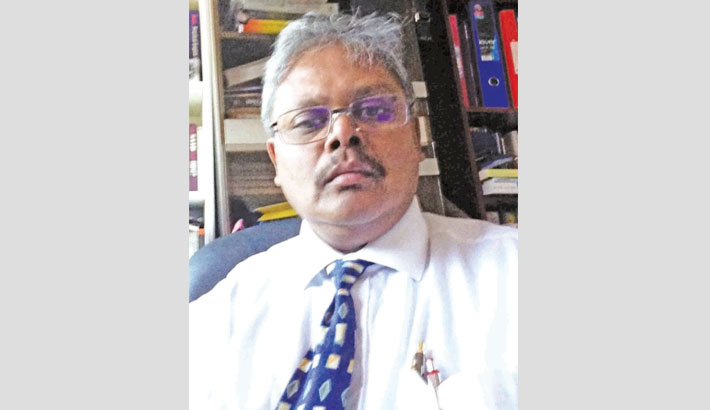 Dhaka is a city of traffic congestion, air, land, water and noise pollution and potholes. It is known as the Rickshaw capital of the world. Some reports suggest that 400,000 cycles and rickshaws run on the road every day and they battle for space with buses, car, pedestrians and auto-rickshaws. Varying speeds of motorised vehicles versus non-motorised transportation resulted in major traffic congestion in the city. The report regarding potholes repair suggests that in most cases the authorities go for stop-gap solutions for potholes–bringing in a truckload of bitumen-mixed gravel at night, pour the mixture into the holes and run a heavy roller. Combination of rain and traffic open up the holes again. A pothole is indirectly related to a drainage system, because the drainage system built along most city streets cannot flush out rain waters, which deteriorate the road surface.

Dhaka is a city of contrast and disparity. Once dhak trees were very common in the area and the name may be originated from it, but others suggest that the name may be related to Goddess Dhakeshwari, a temple is a centre for religious festivals. Another theory is from musical instrument dhak, which was ordered to be played by Subahdar Islam Khan during the inauguration of the Bengal capital in 1610.

Dhaka follows 80/20 rules. This means 80% of wealth is captured by 20% people. So, the rest 20% of wealth is for 80% people. There is a sharp contrast between the rich and poor, developed and underdeveloped areas or a good road and bad road in the city. If one travels from Tikatoli to Gulistan or travels through a road people generally knows as VIP road or look around Gulistan or Gulshan one should be able to observe this. Obviously one might argue that this is a subjective observation, but in any social research it is difficult to ignore ‘I’.  We may sometimes compromise with our ‘I’. Philosopher Edmund Burke argued that ‘every human benefit, every virtue and every prudent act is founded on compromise’ and naturally ‘I’ plays an important role.

In order to support my assertion, I would like to present some statistics. According to the World Bank report, the average traffic speed in Dhaka has dropped from 21 kilometres per hour (kmph) to 7 kmph in the last 10 years. If the current traffic condition persists, then by 2035 the speed might drop to 4 kmph, which is slower than the walking speed. Other study suggests that the traffic congestion is wasting around 5 million working hours every day, which equates to approximately 11 billion US dollars in financial term.

Sometimes volume of traffic and carrying capacity of a particular road may cause traffic chaos. Also my recent observation suggests that some individual road users’ behaviour play a big part in traffic chaos. A survey by the Passengers' Welfare Association has revealed that at least 87 per cent of buses and minibuses violate traffic rules. Bangladesh Road Transport Authority (BRTA) Statistics shows that in 2018 (January-May) 54,788 vehicles were registered. This means that 365 vehicles hit the Dhaka city per day during this period. The number of motor cycles and private cars are proportionately higher than other types of vehicles. This means that probably people can’t rely upon public transport. So, they are moving to private vehicles. In absence of the development of reliable public transport system, this trend will continue, which will saturate completely the carrying capacity of different streets in Dhaka city.

Another reason of traffic overflow in the city is that Dhaka has proved to be the main driver for economic growth. Its contribution to GDP is 36% and the country’s 44% employment is in Dhaka city.  So, migration of population is towards Dhaka city from other cities and towns. This makes huge contribution to traffic flow.

I would like to analyse the problem within the context of non-Euclidean geometry. Euclid, sometimes given the name Euclid of Alexandria often referred to as the founder of geometry or the father of geometry. He was active in Alexandria during the reign of Ptolemy I (323–283 BC). His book titled Elements is one of the most influential works in geometry. In the Elements, Euclid deduced the theorems of what is now called Euclidean geometry from a small set of axioms. As for examples and according to Euclid, all points on a Euclidean circle are equidistant from the centre. In Euclidean geometry when we add up three angles of a triangle we get 180 degree. But this is not the only reality. Mathematician Gauss discovered non-Euclidean geometry in 1800s. Gauss thought that if geometry needs not be Euclidean, real space needs not be Euclidean either. As an example, elliptic geometry is more than 180 degree. A hyperbolic geometry is less than 180 degree, but Euclidean space has curvature zero. So, constant positive curvature is elliptic, zero curvature is flat and Euclidean and constant negative curvature is hyperbolic.

In Euclidean geometry, given a point and a line, there is exactly one line through the point that is in the same plane as the given line and never intersects it. In spherical geometry there are no such lines. In hyperbolic geometry there are at least two distinct lines that pass through the point and are parallel to the given line and do not intersect. This is a non-Euclidean space. A non-Euclidean space of Dhaka city covered the some part of the city where 80% of peoples are travelling or living. Potholes teamed with the steep rise or descent of flyovers and connecting roads create a non-Euclidean space.

If we stand at the centre of a circle we can see 180 degree without turning in other direction. In order to understand Dhaka, we need to understand a curvature and an impact of potholes on her behaviour. Dhaka, though naturally flat, are artificially curved. Sometimes that curved space is not used by anybody. Look at the flyovers for the passers-by. People are not using these. They want flat surface to walk quickly. They do not know that ‘if they want to go far, they should go together following rules and regulation, if they want to go quickly, they might go alone.’

Dhaka slows down human behaviour. I start my day with a ‘to do’ list in my hand for five things. But I end up doing only one thing because my day is finished in traffic congestion. I become slow and demoralised. Even though I have the potential to do things, I cannot. Dhaka slows me down. Her behaviour needs to be changed. Dhaka needs both civil and social engineering. Potholes in a flat space make a surface curved, a non-Euclidean space. But one can follow a hyperbolic geometry knowingly or unknowingly and stay on parallel lanes.

Think about Strategic Transport Plan (STP) of Dhaka that was adopted by the present government in 2009 and already started some transit projects. Is there any regulatory impact assessment carried out on such a plan? Are the proposed alignments in tune with different transit routes-such as elevated express way and metro line alignment? Dhaka needs quality urban mass transit system. Do all highways and expressways solve this crisis? I suggest some computer simulation modelling of STP impact on Dhaka city. While the STP is based on the bird’s eye view, we also need frog’s eye view in order to solve the traffic congestion in Dhaka city. As an example, recovery of pavements from unauthorised vendors or management of vehicle parking on the roadside require a management system with the frog’s eye view.

History suggests that one of the reasons for the collapse of Maya civilisation was the failure of their drainage system. Dhaka city can be collapsed for the failure of the traffic system, which in turn might lead to the crisis for a democracy if not tackled urgently. I was frightened and alarmed when I spent half of my day sitting inside a car on a street in Dhaka city. I felt that I lost my freedom for doing things in a timely manner. In an essay titled ‘Kant and the philosophical method’, philosopher John Dewey mentioned that we only think when we are confronted with problems. Such confrontation can generate ideas for solution and give us hope. I am aware that Nietzsche famously said, ‘Hope is the worst evils, for it prolongs the torment of man.’ But death is hope’s only alternative. I reject the alternative and think about Voltaire, when he says, ‘one day everything will be well, this is our hope. Today everything is fine, this is our illusion.’ We should come out of such illusion.

Dhaka is a city of joy. I love her noise, when I feel silence is isolation. I love her dust, when I feel breathing is monotonous.  So, I hope for the future. Dhaka needs to change her behaviour. She can and will be a beautiful city one day. She needs a drive from a democratic political will and social engineering. Like poet Walt Whitman, I say for my Dhaka, ‘The past, the future, dwelling there, like space inseparable together.’

The writer is an Environmental Advisor based in UK and a Climate Reality Leader for the former US Vice President Al Gore’s Climate Reality Project. The opinions expressed here are those of the author.