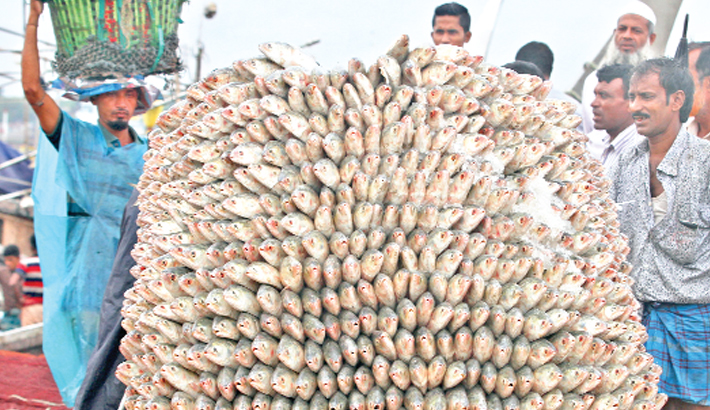 Fish traders arrange hilsa in Fishery Ghat area of Chattogram city on Sunday for carrying them to wholesale markets. Fishermen in the area are now getting good catches of hilsa. — sun photo

The full moon has brought hilsa in large numbers to river estuaries, enabling the fishermen to net plenty of hilsa and making good profits.

He said September is the peak time for hilsa netting as a large number of hilsa moves to the river during this period.

Fishermen of Chandpur, Chittagong and other coastal areas are making good profits, he informed.

Dr M Anisur Rahman said in the past few years, the fishing ban on mother and juvenile hilsa has successfully help sustain the marine fish in the rivers.

He expressed hope that hilsa production would exceed 5 lakh tonnes this year.

Country’s hilsa production has increased by around 150 per cent in the last 15 years due to the government’s different initiatives including a temporary ban on fishing during the breeding season and livelihood support for the fishermen.

Supply of hilsa has already increased in the city’s retail markets.

Mohammad Razu, a fish trader at the market, said the supply of hilsa has increased after the Eid, and the price has come down as the presence of customers is thin.

Many consumers, however, alleged hilsa price is yet to drop to a reasonable level despite the rise in supply.

“We cannot afford hilsa due to the exorbitant prices of the fish,” said Asma Ahmed, a consumer visiting the kitchen market in the city on Sunday.

The government moved to ban netting of hilsa fries in 2004-5 FY to boost the production of the marine fish. Heavy rainfall and favourable weather conditions have also contributed to the rise in hilsa production this year.

Experts said if the government continues to put restrictions on catching hilsa fries and mother hilsa, people will get a plenty of hilsa round the year.

Hilsa fish move from coastal areas to the Padma and Meghna rivers to lay eggs around the first full moon of the Bangla calendar month of Ashwin.