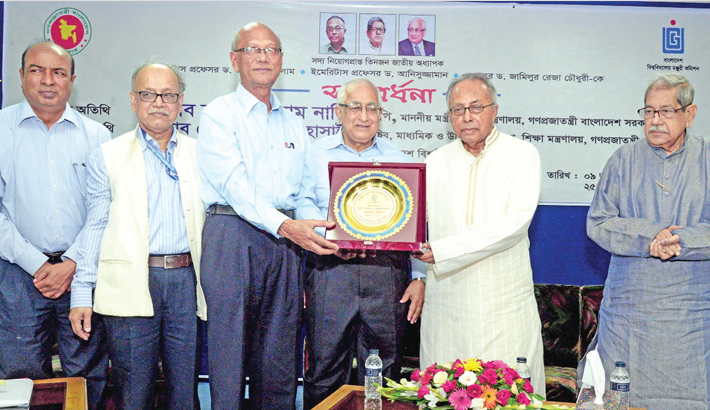 University Grants Commission (UGC) on Monday accorded grand reception to the three newly-appointed national professors for their enviable achievements and contribution in many areas of human activities.

Education Minister Nurul Islam Nahid was present as the chief guest while Md Sohrab Hossain, Secretary of Secondary and Higher Education Division of Education Ministry was present as the special guest on the occasion. Nahid said that the nation and country has been enlightened by their knowledge, skills and wisdom saying that the national professors are lighthouse of the knowledge.

He said the national professor represents an epitome of dignity, conscience, patriotism, devotion and the very essence of human values.  Education minister said university is the storehouse of knowledge where new knowledge will be created and knowledge will be disseminated among the stakeholders.

Laying emphasis on education to take the country ahead, Nahid said the budgetary allocation has been increased in research in excellence of higher education and in creation of new knowledge.

Sohrab Hossain said the government has recognised the deserving people for this position. The three professors have taught the nation honesty, sincerity, rebellion throughout their lives. While receiving reception, the three national professors expressed their feelings and remembered their teachers and students who supported them throughout their journey.

Prof Jamilur Reza Chowdhury said “Renowned structural engineer and architect Fazlur Rahman Khan was offered me to go abroad and working with him but I did not go abroad. The country gave me a lot; I could not get it in other countries.”

Prof Dr Anisuzzman said “The country has given me more in comparison to what I have given to the country.”

Prof Dr. Rafiqul Islam said it is because of the love and support of his teachers and students he has come so far. He thanked the government for appointing them as national professors.

UGC Chairman Prof Mannan said these eminent educationists have given correct directions to the nation at various crisis moments of the country. The people will follow their footprints of these enlightened educationists.