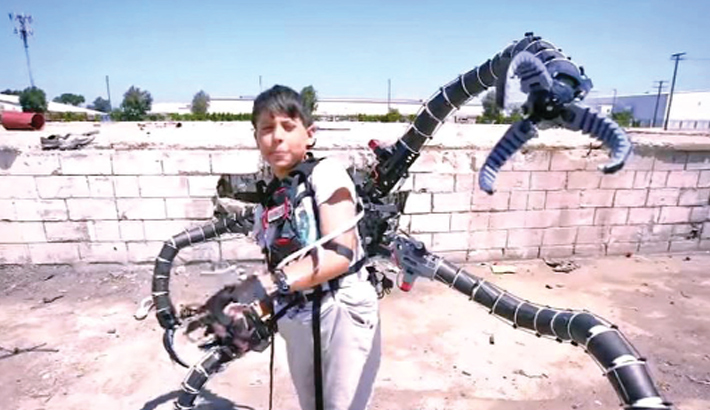 19-year-old Finman, who got his start in cryptocurrency when he was only 12, by investing a $1,000 gift from his grandmother in Bitcoin, is now worth around $3 million, and is considered one of the world’s most influential teenagers. He has been involved in several projects over the last few years, from start-ups to an ongoing collaboration with NASA, but his most exciting venture yet has to be transforming a 10-year-old comics fan into a real-life version of Marvel villain Dr. Octopus with the help of an intriguing prosthesis.

Aristou Meehan, whose dad is a friend of Finman, suffers from hyper mobility syndrome and had always believed that having his own Dr. Octopus suit would make things a lot easier for him. Obviously the chances of actually getting your hands on any device featured in comic books is very rare, but that didn’t stop Meehan from coming up with a viable concept for the four mechanical arm prosthesis. And when Erik Finman got a good look at it, he decided that making it a reality was worth a try.

“He came up with this idea — because he’s a huge comic book fan, a huge Spider-Man fan — of having his own Doctor Octopus suit. He said ‘that would solve my problems,’” Finman told Digital Trends. “I thought that was such a smart idea and sweet. For me, it would have been so great if someone had helped me at that age. So I felt like a kindred spirit in a lot of ways.”

So the young millionaire put together a “ragtag team of engineers” and set out to make the Dr. Octopus suit a reality. But building a proper prosthesis, especially one as advanced as that of Dr. Octopus would normally cost tens of millions of dollars. Finman and his team decided to rely on 3D printing, building their own custom printer. The design and manufacturing process took about six months, which is a relatively short period of time for such ambitious project. Still, the result was quite impressive.

True to its inspiration, the unusual prosthesis featured four flexible tentacles controlled via rear-mounted microcontrollers and powered by a total of eight servo-motors. The motors themselves are powered by a 4-cell Lithium Motorcycle battery which is relatively small and makes the overall weight of the suit (12.5 pounds) manageable, even for 10-year-old Aristou.

“The whole suit was designed from scratch, we didn’t want to use off-the-shelf components outside of the electronics because of the size and weight considerations,  instead of using universal brackets and mounts we designed every piece to perform multiple functions,  for example the tentacle base piece each hold both servos,  the entire cable-drive system, are hinged at the base to allow the user to move more freely and contain a bunch of tabs and eyelets to run cables and wires through,” Finman told All3dp.

“One of the things is we wanted to be able to bend and have the arm have all these degrees of rotation and these bending points. So, we could’ve had 50 expensive, super-heavy motors, but that wouldn’t have worked out. So, what we did is we got all these coffee cups and we got these three very slim carbon fibre wires so that you can pull the cups to go in a certain way. And in the back, there is one motor for each arm, so four motors to control the position of the strings so that way it pulls it a certain way. So, it’s actually really clever how we were able to do that super cheap and super lightweight because that was one of the biggest problems.”

At the moment, Aristou’s impressive Dr. Octopus suit is only a prototype capable of lifting lightweight objects and making him look cool in front of his friends or at cosplaying events like ComicCon, but it’s also a sign of things to come. Erik Finman believes that with further refinements and modifications, the suit will one day be able to lift up something as heavy as a car, and have applications in various industries, like construction or the medical industry.

“Right now, it’s like a concept car, but I’ve been talking with a lot of people who are interested in doing more with it,” the young Bitcoin millionaire said.