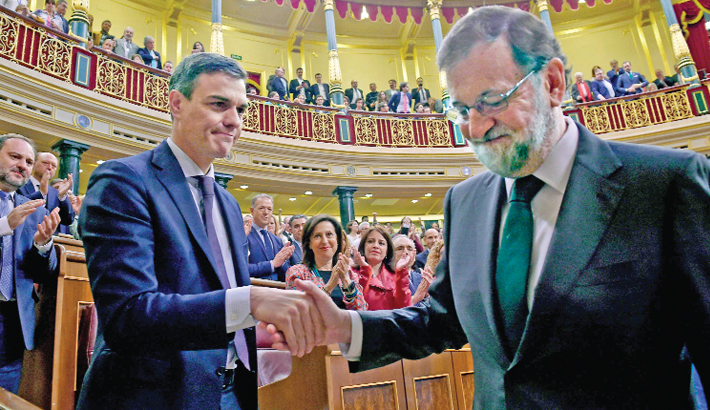 An absolute majority of 180 lawmakers voted for the motion to loud applause and shouts of “Yes we can,” converting Rajoy into the first prime minister to be ousted by such a vote since Spain transitioned to democracy in 1977.

The bespectacled 63-year-old leader got up and shook hands with Sanchez before leaving the lower house without a word.

Rajoy had already admitted defeat minutes before the vote, knowing that an absolute majority of lawmakers as diverse as Catalan separatists and Basque nationalists had pledged their support for the no-confidence motion.

“It’s been an honour—there is none bigger—to have been Spain’s prime minister,” he told parliament, with lawmakers from his conservative Popular Party (PP) giving him a standing ovation.

Sanchez, Spain’s 46-year-old opposition leader, had instigated the no-confidence motion last week after a court revealed details of a vast system of bribes given to former PP officials in exchange for lucrative public contracts between 1999-2005.

After years of anger over the scandals tainting the PP, corruption finally got the better of the party and sealed Rajoy’s downfall. “Today we are signing a new page in the history of democracy in our country,” Sanchez told parliament prior to the vote.

But PP lawmaker Rafael Hernando told him he would be entering the prime minister’s office “through the back door” after failing to win 2015 and 2016 general elections.

“For the first time we may get a prime minister who didn’t win elections,” he retorted.