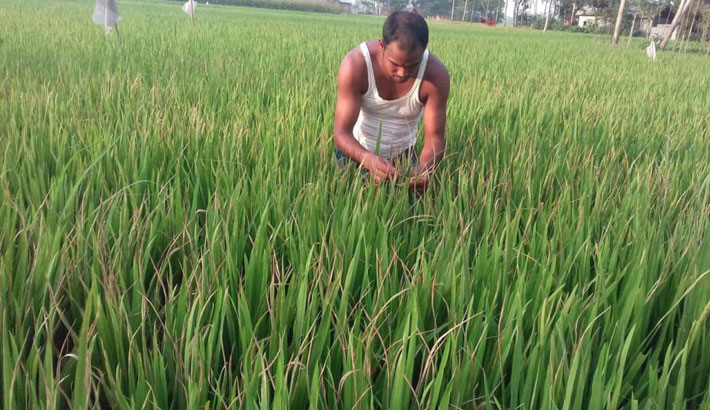 The government is expecting higher Boro production this seasons. Farmers are, however, worried over the recent blast attack on their crop.

After facing huge crop looses by flash flood, blast and excessive rain in the last Boro season the government hopes for a higher boro production this season.

Boro is the main crop that comprises 55 per cent to the overall rice supply of the country, according to the MoA.

He said that they are getting huge response from farmers about Boro cultivation and expecting the production will exceed the target. The rising trend of rice prices has inspired farmers towards Boro farming as the market trend is indicating a positive sign for the peasantry.

However, most of the farmers are still concerned as many of their paddy fields have been attacked by the blast disease during the flowering time.

Like previous year, a fungal disease ‘leaf blast, neck blast’ has broken out in Boro paddy fields in many parts of the country, raising serious concern among farmers.

Experts said extreme temperature, prolonged dew, adverse weather, use of low quality seeds and delay in plantation are the main reasons behind the outbreak of the disease.

The blast attack on the croplands has also made scientists worried. They have sought immediate steps from the government for combating the decease.

In FY 16-17, crops around 11,000 metric tonnes was affected by a fungi (neck blast)  attack on a limited area of 2500 to 3000 hector of Boro rice crop at several northern and southern districts of the country, according to GAIN Report of USDA.