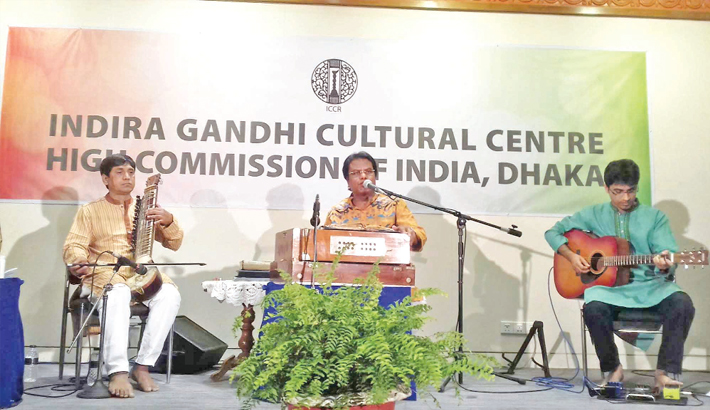 Indira Gandhi Culture Centre was organised the Rabindra Sangeet evening by Mahadeb Ghose at Sufia Kamal Auditorium of the museum at 6.30PM on the day.

The singer was accompanied with Gautam Sarkar on Tabla, Asit Biswas on Esraj, Mohd Nasir on guitar and Robins on keyboard.

Mahadeb Ghose is an established Rabindra Sangeet singer of Bangladesh. He has completed a certificate course on Rabindra Sangeet from the Bulbul Academy of Fine Arts (BAFA) and has also taken training under many Gurus including Late Abdul Ahad, Late Kalim Sharafi, Late Sudhin Das, and Late Ajit Roy.

Mahadeb Ghose is presently Vice Principal and Senior Teacher of Rabindra Sangeet at BAFA. He is an enlisted special grade singer of BTV and Bangladesh Betar and also sings regularly in many TV channels of Bangladesh and India.

He established an organisation “Rabirashmi” in 1998 where Rabindra Sangeet is taught.  He has released seven music albums - his first album “Amar Hiyar Majhe” was by Sangeeta in Bangladesh, another “Amar Praner Manush Ache Prane” by Gathani of India and five others by Laser Vision.

Ghose performs regularly on stage in Dhaka and other parts of Bangladesh. He has also given many performances abroad, in India, Australia and Kuwait, some of which were organised by the Bangladesh Government.

He has received many awards including award by “PODOKKHEP BANGLADESH” for contributing music to the nation during the 40th year celebration of Independence of Bangladesh, and award by “Vanguard TV” News Channel in Agartala for their 4th Year anniversary celebration.

Ghose also has an M Com degree from University of Dhaka and is an Associate Professor and Head of Management Department, Ispahani University College.