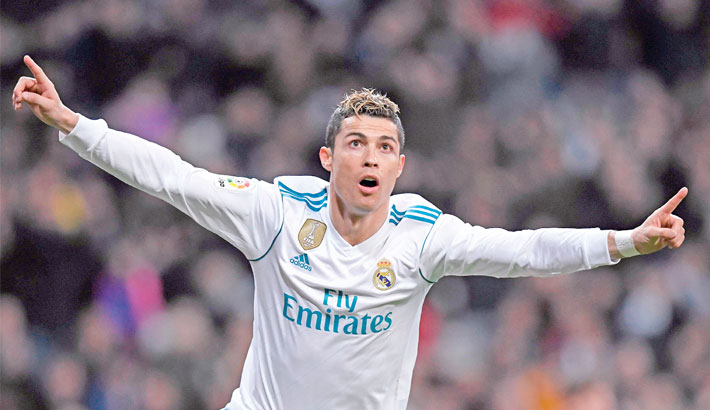 Cristiano Ronaldo bagged a hat-trick as Real Madrid warmed up for their Champions League showdown with Paris Saint-Germain with a big 5-2 victory over Real Sociedad in La Liga on Saturday.

Zinedine Zidane’s men have not scaled their usual heights this season and this was still not perfect, but they do look to be finding some form just in time for a potentially season-defining tie with the French side on Wednesday.

They blew Real Sociedad apart in the first half at the Santiago Bernabeu, taking the lead inside a minute through Lucas Vazquez and finding themselves four goals ahead by the interval. Toni Kroos got Real’s other goal, as they made it three wins and a draw from their last four La Liga games, with 18 goals scored in that time.

The defensive lapses that allowed the visitors to pull two goals back late on will be a concern for Zidane, but Ronaldo’s return to form is a huge boost.

“He always has that mindset. He lives for that, for scoring goals, and today he showed with his three goals that you need to watch out for him,” Zidane said.

“He could have scored one or two more, and it augurs well for Wednesday.”

Madrid are still a huge 16 points behind unbeaten league leaders Barcelona, but they are now back up to third above Valencia, who play Levante on Sunday.

Asensio and Marcelo combined superbly to set up Ronaldo to make it 2-0 before the half-hour mark, and Kroos made it three with a trademark curling strike on his right foot from the edge of the area.

Ronaldo then headed home a Luka Modric corner on 37 minutes, and it could have been more than 4-0 at half-time, too, with Karim Benzema and Ronaldo both hitting the post from close range.

They could not keep up the same intensity after the restart, however. Instead, Juanmi headed against the post for the Basque side, who pulled one back on 74 minutes as substitute Jon Bautista was given space to slot past Keylor Navas.

Ronaldo then completed his hat-trick, pouncing to finish after Geronimo Rulli had spilled a shot from Bale, on as a substitute.

It was Ronaldo’s 11th league goal of the season, with seven coming in the last four games.

The quickest goal on Saturday was not scored by Real, but by Antoine Griezmann, who needed only 39 seconds to find the net in Atletico Madrid’s 1-0 win at bottom side Malaga that left them just six points off top spot.