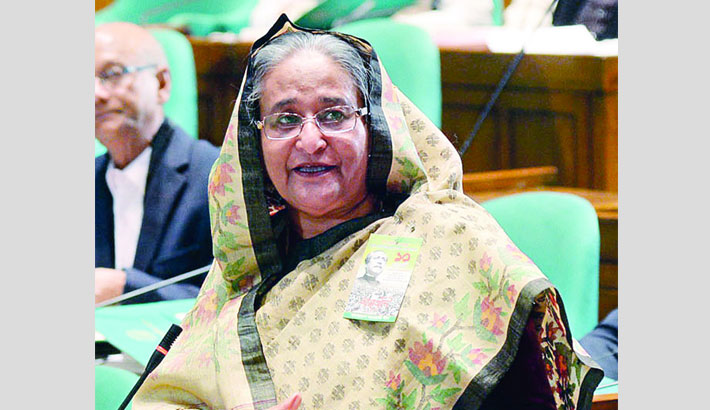 She said Tarique Rahman, also the senior vice-chairman of BNP, alone laundered $80 million to different tax havens between 1993 and 2006 while Arafat Rahman Koko siphoned off $250 million to Malaysia.

The prime minister made the statement while revealing the names of Bangladeshi politicians, businessmen, organisations, financial institutions, agents and brokerage houses listed on the Paradise Papers.

Paradise Papers are a set of 13.4 million confidential electronic documents, relating to secret ties, dealings and offshore interests of many influential people and institutions from around the world, which were leaked to the media in November last year.

Sheikh Hasina vowed to bring to book the “corrupt individuals who have looted and laundered money through illegal offshore deals”.

“I want to make it clear that we won’t let anymore to siphon off the country’s money abroad,” she said while responding to a question from reserved seat lawmaker Fazilatun Nasa Bappy.

The premier placed a list of 50 persons, including Awami League Presidium member Kazi Jafarullah, and a Bangladeshi company whose names were linked to the Paradise

“After investigations, legal action will be taken against the persons involved in the scam. Necessary measures will be taken to bring back the laundered money,” she told the JS session with Speaker Shirin Sharmin Chaudhury in the chair.

Several other companies bearing Bangladesh’s name have also surfaced in the Paradise Papers.

Referring to the corruption committed by Khaleda Zia, the premier said the BNP chief has been placed in the third position among the most corrupt people, adding information to support this claim were revealed in various media worldwide.

“Khaleda Zid has not protested any such news,” she said.

“They have houses worth several million dollars in Dubai and also own markets and other assets in Saudi Arabia,” she alleged.

“Tarique Rahman has laundered a huge amount of money abroad. Tarique and his business partner Giasuddin Al Mamun laundered around Tk 21 crore to CTNA Bank in Singapore in exchange for awarding a work order to a foreign company,” she added.

In her scripted reply, the premier also tagged 153 pages, which includes news items, published in different local and foreign media and social media as an evidence of corruptions committed by Tarique and Koko and other people and organisations.

Recently, a drive against corruption in Saudi Arabia revealed that Khaleda Zia and her son Tarique Rahman siphoned off Tk 500 crore to Saudi Arabia.

Besides, they also laundered Tk 1,200 crore to Saudi Arabia, Dubai and the Middle East.

Lawmaker Fazilatun Nasa Bappy alleged that Tarique has a joint business venture with mafia Don Daud Ibrahim. They have a joint account worth Tk 400 crore. “According to a research organisation named ‘People’s and Politics’, the amount of Tarique’s illegal property is worth $ 225 crore,” she said.

Bappy asked the premier whether the government would take measures to bring back the money and bring them under book.

Responding to the question, the premier said her government is firmly committed to taking legal actions against those who have earned wealth through corruption or illegal means.

She said that a task force headed by the Attorney General has been working to bring back the laundered money.

In reply to a supplementary question, the premier said she placed news items of various media on the corruption of Zia family in her scripted reply.

“Now different organisations will verify the information. Khaleda Zia should protest if these news stories are false,” Hasina said.