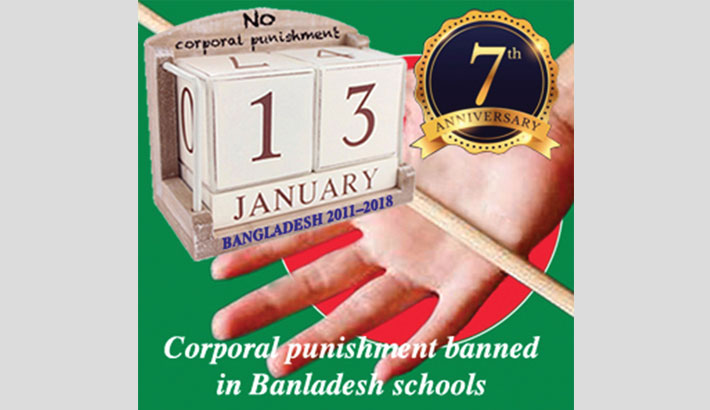 Saturday, January 13th marks the seventh anniversary of the banning of corporal punishment in all Bangladeshi schools. Let’s be bold, courageous, call a spade a spade, jump-in at the deep end, and make it categorically clear there is nothing that justifies corporal punishment in the eyes of God or man…NOTHING!

Poor parenting and poor teaching skills do not justify corporal punishment and those who dish it out are not only lawbreakers, but working against the wishes of the Creator.

Those of Christian belief can seek references in the Bible where it says Mary and Joseph beat Jesus or that Jesus beat the children he taught, but they won’t be able to find any.

“But, it advises in the Good Book that if you spare the ‘rod’ you spoil the child,” I hear you scream. That priceless advice is there, but the problem is in the misinterpretation of the word ‘rod’. In Hebrew the word ‘rod’ is the same word used in Psalms 23:4, ‘thy rod and thy staff, they comfort me.’

The shepherd’s rod/staff was/is used to ENCOURAGE, GUIDE, and DISCIPLINE the sheep towards taking a desired direction, NOT to beat, hurt or damage them.

The correct interpretation of the proverb, therefore, should read ‘spare good GUIDANCE and spoil the child’. And that makes a load of good sense.

Try to imagine Muhammad or Jesus slapping children in the face, beating them with sticks, pulling their hair, or giving them a trashing as some of the kids in school today experience. Impossible!

Since positive discipline techniques do not, never have, and never will include punishment, it’s essential to note the distinction between the terms ‘punishment’ and ‘discipline.’ Punishment in essence means: ‘to cause pain’. Discipline in essence means ‘to guide’.

Bangladeshi Nobel Laureate and Rabindranath Tagore, who abhorred corporal punishment, made a generous gift to the world when he wrote: “To discipline means to teach, not to punish,” but don’t expect ignorant ‘teachers’ to know or take heed, they’re too much wrapped-up in their own misguided, inflated self-importance to notice.

All the great motivators of the day (Bill Gates, Sir Richard Branson, Jack Ma, to name a few) all say:

If Bangladeshi ‘teachers’ abolish corporal punishment and only utilize one of those above, they’re serving the best interest of the child, nation and society in general. Imagine how great Bangladesh would become if all were utilized harmoniously.

Corporal punishment is abhorrent to professional, compassionate, educated teachers who know how to teach properly and these teachers are loved as much as they are respected and cherished by pupils, parents and society.

Corporal punishment is an invention of hell executed on earth by ignorant people. It affects everyone to some degree. There is the hapless child who receives the torture, hurt, pain, and is dispirited, broken, tormented and traumatized by the horrific thoughts perhaps for life.

They become the young rebel adults who seek ways to take revenge against the teachers/school/society who permitted their abuse. They might raze the school to the ground; become muggers, seek ways to off-load their pain upon others, become wife-beaters, child-beaters or encapsulate their pain within themselves and seek solace and comfort by taking alcohol; smoking cigarettes, gunge or marijuana trying to find escape from the hell that imprisons their mind. Many, unfortunately, then travel the one-way street of cocaine and heroin.

Such cases are well documented. While we may not know any broken children/adults or drug addicts personally, when our TV sets, computers and mobile phones go missing, we know they’ve been around. But can we really blame them for their unsocial behaviour when government-salaried ‘teachers’ taught them violence and disrespect in their schools and madrasahs from our taxes?

We reap as we sow

Why should they give a hoot about the society that has shown them no love, protection, and respect during their most vulnerable, formative years, when their minds were pliable and could be fashioned to best serve themselves, society, and the nation at large? We reap as we sow.

Britain’s Queen Elizabeth ll once said: “Children – not gold, coal or iron are our greatest assets.”

The Bangladesh version, voiced by Prime Minister Sheikh Hasina, might read: “Children – not gold, coal or jute are our greatest assets.”

When Justice Md. Imman Ali and Justice Md. Sheikh Hasan Arif outlawed corporal punishment in Bangladesh schools and madrassas on January 13, 2011, they defined the horrible act as ‘cruel, inhuman and degrading treatment and a clear violation of a child’s fundamental right to life, liberty and freedom’.

With the backing of the 2011 law, parents and pupils alike are given the choice for the suffering and abuse of corporal punishment to continue or to stop. This is done, simply, by saying ‘no’ (a very powerful word for its small size).

Despite the overwhelming amount of evidence to the contrary, there are people walking among us who ignore the truth and actually believe corporal punishment is good (wait for it…) because it hasn’t done them any harm! God love them, they’re more to be pitied than laughed at.

When Nadine Block, author of the best-selling anti corporal punishment book ‘Breaking the Paddle’ is confronted by such ignorance, she told me: “I ask the ignoramuses who say they got hit as a child and turned out OK, ‘you might have turned out even better if you had not been hit.”

It doesn’t matter from which angle you look; corporal punishment isn’t pretty. It serves no useful purpose whatsoever, but causes untold damage by creating damaged children, broken adults and fashions an appalling society that everybody loathes.

Let’s be bold, courageous, call a spade a spade and face the fact, NOTHING justifies corporal punishment in the eyes of God or man and stop it from happening in 2018!

The writer is a humanitarian activist