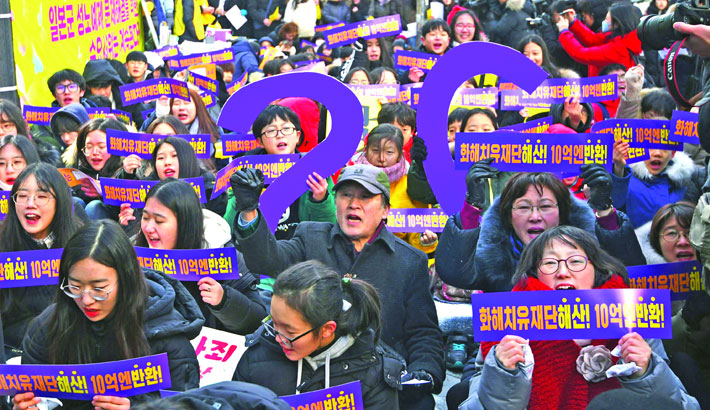 Protesters supporting former “comfort women”, who served as sex slaves for Japanese soldiers during World War II, hold banners reading “Disband the Tokyo-funded Reconciliation and Healing Foundation! Give back one billion yen!” during a weekly anti-Japan rally near the Japanese embassy in Seoul on Wednesday. – AFP PHOTO

SEOUL: South Korean President Moon Jae-In on Wednesday called for a “heartfelt apology” from Japan to the victims of wartime sex slavery, condemning a 2015 agreement as a “wrongful” solution, reports AFP.

Seoul said this week that it would not seek to renegotiate the deal, as it had been agreed by both Tokyo and the previous South Korean government. But it said it would no longer use Japanese money to compensate the survivors.

The issue of women forced into sexual slavery for Japanese troops in World War II has roiled relations between the neighbours—both of them US allies and both threatened by nuclear-armed North Korea—for decades.

The deal on the so-called “comfort women” should not have been struck without the involvement of the victims, Moon told a New Year press conference. “This issue cannot be resolved through a give-and-take deal between governments struck over the victims’ head,” he said.

“A wrong knot has to be untied. Japan should accept the truth, make a heartfelt apology to victims.”

Doing so would enable the survivors to forgive it for its past wrongs, he added.

The agreement was finalised by now-ousted president Park Geun-Hye under pressure from Washington in the face of mounting security threats from North Korea.

Under the deal, South Korea promised not to raise the issue again and Japan transferred 1 billion yen (now $8.9 million) to a foundation dedicated to supporting the victims.

Tokyo has reacted angrily to comments on the issue this week by Seoul.

Yoshihide Suga, the top Japanese government spokesman and the Chief Cabinet Secretary, said Wednesday: “Japan can never accept it if the South Korean side demands we take further measures despite the agreement that confirmed the final and irreversible solution on the issue.”

Moon had lambasted the agreement on the campaign trail and was elected president in May after Park was impeached and jailed over a massive corruption scandal.