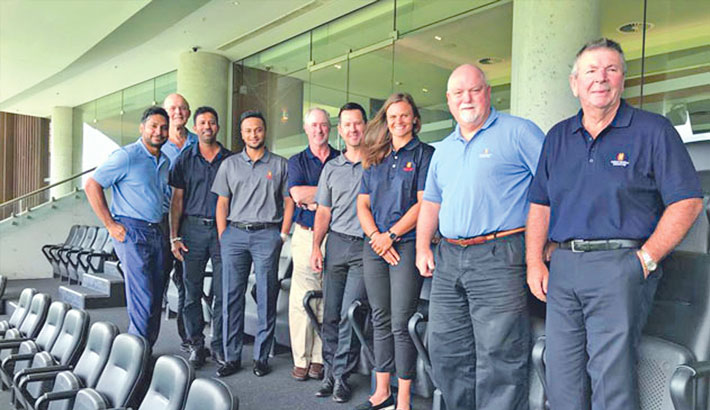 Bangladesh Test and T20 skipper Shakib Al Hasan, fourth left, are seen along with other members of MCC World Cricket committee at Sydney Cricket Ground in Australia. Shakib became the first player from Bangladesh to attend MCC meeting on Wednesday.

The MCC World Cricket committee met at Sydney Cricket Ground on Tuesday 9th and Wednesday 10th January to discuss a number of topics ranging from the future of Test Cricket to the MCC Laws of Cricket, reports Lords.org.

Shakib Al Hasan, the first player from Bangladesh to sit on the group, and who was attending his first meeting, addressed the World Cricket committee by giving his view on a range of issues affecting the modern player. Shakib’s experiences contrasted with those of Jonny Bairstow, who spoke to the committee at the July 2017 meeting, and highlighted that the choices facing a modern professional vary greatly from country to country.

Shakib described how his greatest honour is representing his country, but the financial incentives do not match those available in global domestic T20 tournaments. He was concerned that many younger players, who don’t share his view of wishing to play Test cricket for a long period, will prefer the shorter format of the game that is more readily available and offers more financial security than playing longer-form cricket. It is a hard choice for players in some countries to make, and the committee feels it has created an imbalance in the international game.

“We’d love to see the ICC get more involved in making sure the money goes where it should go - to players,” Ponting said.

“It’s also about understanding that domestic T20 tournaments are giving players almost an easy out to not represent their country and be remunerated in a better way to play those domestic tournaments.”

“That’s where it’s important to ensure some of these payments even up somewhere. You don’t see English or Australian players not representing their countries to play the IPL, and that’s because they’re remunerated well.”

Ponting added: “Shakib spoke about coming from Bangladesh and some of the issues and dramas they’ve had over the years but he also spoke about the ICC needing to take control of where the money goes because he knows a lot of money is going to the right place but it’s not getting through to the players the way it probably should.”

The key outcomes from the meeting were:

► Rewarding players properly is vital to the future of Test Match cricket.

► BCCI strongly urged to support cricket in the Olympics.

► Player associations should become more involved in reporting of corruption.

► Suspending play in extreme heat is within the Laws.

► The next meeting of the MCC World Cricket Committee will take place at Lord’s in August 2018.