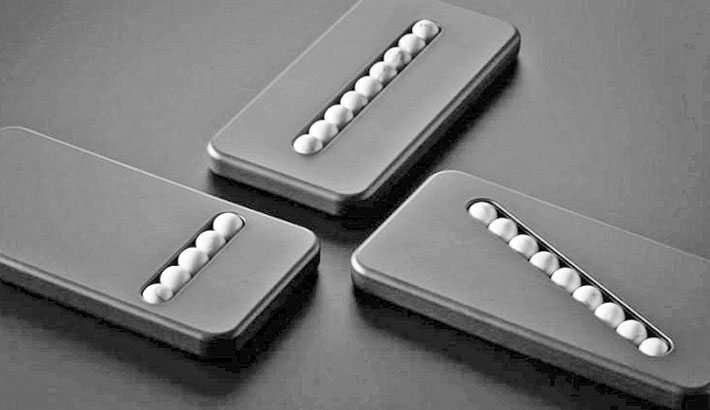 Austrian designer Klemens Schillinger has created a therapeutic replacement for smartphones called Substitute Phones. The Vienna-based designer made a series of five of these non-devices which feature a row of stone beads to imitate various motions typical to smartphone use, such as scrolling, zooming, and swiping.

By using stone beads to emulate interaction with a phone’s touchscreen, Schillinger aims to create therapeutic tools that can provide the physical simulation that frequent smartphone users crave, and help them cope with the withdrawal symptoms of being away from their phones for long periods of time

“The touchscreen smartphone has made it possible to ‘escape’ into social media,” Schillinger told Dezeen. “We check emails and messages not only on public transport but also in social situations, for example when having drinks with friends. More and more often one feels the urge to check their phone, even if you are not expecting a specific message or call. These observations inspired the idea of making a tool that would help stop this ‘checking’ behaviour.”

The Substitute Phones bodies are made of black polyoxymethylene (POM) plastic, also known as acetal. They’re a similar size and weight to typical smartphones, making the simulation more convincing. Marbled Howlite beads are integrated into the case in one of five designs and roll in place, simulating the frictionless feel associated with touchscreen use. They are designed in such a way as to allow users to perform various gestures associated with smartphones, such as swiping and pinching.

“Some of these finger movements – like zooming in, or moving up and down – were born with the smartphone,” the designer said. “The Substitute Phones allow these movements to be felt by scrolling on the marbles that are integrated into the case, something which is a clear differentiation from fidget spinners or fidget cubes.”

Schillinger says that Italian writer and philosopher Umberto Eco inspired the project because he tried to quit smoking by substituting his pipe with a stick. “It was the same thing, but without the nicotine, just the physical stimulation,” he said. “I remembered this and thought to make phones that would provide the physical stimulation but not the connectivity.”

The Substitute Phone is Schillinger’s second project that aims to discourage people from using their smartphones and other mobile devices such as ipads. The first project, the Offline Lamp, was a typical table lamp that featured a drawer integrated into the pedestal. For the bulb to light up, a smartphone had first to be placed into and then locked in the drawer.

Schillinger created both of the projects for an exhibition called #Offline – Design for the (Good Old) Real World, which took place at Vienna Design Week from 29 September until 8 October 2017.

The Substitute phone is not yet for sale, but Schillinger’s website promises that they’re coming soon and offers an email address for inquiries. This looks like an improved version of the NoPhone, with the beads offering some gesture familiarity.