Pro-govt rallies in Iran after days of protest, unrest 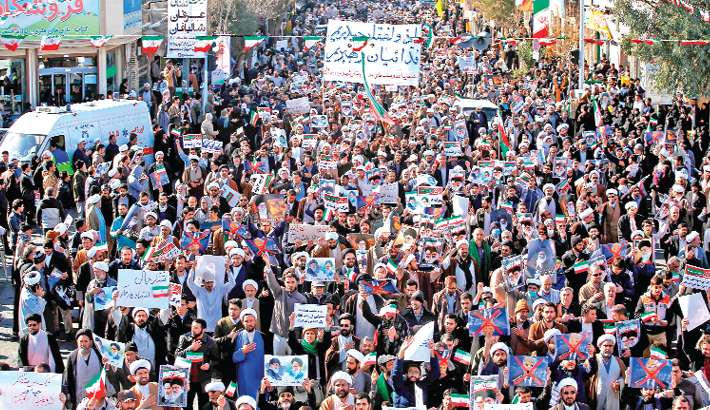 Pro-government demonstrators march in Iran’s holy city of Qom, some 130 kilometres south of Tehran, on Wednesday, as tens of thousands gathered across Iran in a massive show of strength for the Islamic rulers after days of deadly unrest. – AFP PHOTO

TEHRAN: Tens of thousands of Iranians took part in pro-government demonstrations in several cities across the country on Wednesday, Iranian state media reported, a move apparently seeking to calm nerves after a week of protests and unrest that have killed at least 21 people, reports AP.

While the rallies showed support among Iran’s 80 million people for its clerically overseen government, smaller and smaller towns in the Iranian countryside appear to be experiencing the unrest that has already swept through urban areas, according to protesters’ online videos.

Official and semi-official media did not immediately offer new details of the unrest Wednesday. Demonstrators’ videos corresponded with The Associated Press reporting from outside of Iran, though individual protesters themselves remain unreachable. The protests for now also appear to remain leaderless. The protests, the largest seen in Iran since its disputed 2009 presidential election, began on Dec. 28 in Mashhad, Iran’s second-largest city and a bastion for hard-liners. While initially focusing on Iran’s flagging economy and rising food prices, they’ve morphed into demands for wholesale change in Iran’s theocratic government.

On Wednesday, state TV reported that demonstrations took place in dozens of cities and towns, including Ahvaz, the capital of the oil-rich province of Khuzestan, the Kurdish town of Kermanshah in the country’s west and Qom, the religions capital of Shiite Islam in Iran. Demonstrators carried pre-printed signs and Iranian flags, with state TV offering a swooping helicopter shot in Ahvaz to show their scale. Ahvaz and the wider Khuzestan province is home to many ethnic Arabs and has seen unrest amid the protests.

In Qom, state TV cameras focused on the Shiite clerics taking part, many wearing the black turbans identifying them as direct descendants of the Prophet Muhammad (PBUH).