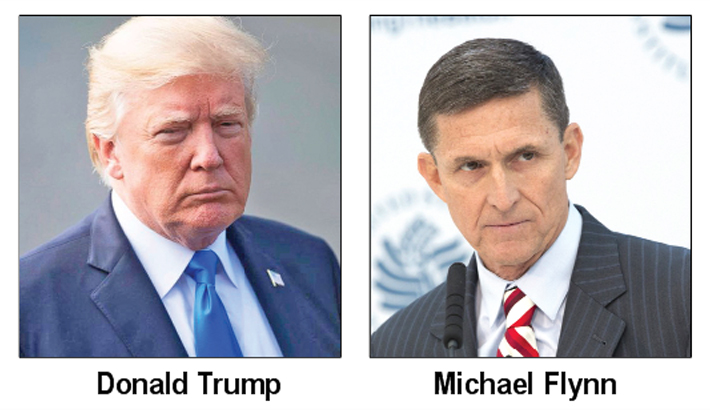 WASHINGTON:  US President Donald Trump on Saturday shrugged off the bombshell news that his former national security adviser pleaded guilty to lying to the FBI and will cooperate with a special prosecutor probing Russian election meddling, reports AFP.

As the Russia probe overshadowed a major legislative win, the Senate’s passing of landmark tax cuts, Trump again insisted he and his campaign had not colluded with Russia.

Trump also suggested he has been holding back something important regarding what he knew at the time of ex-security adviser Michael Flynn’s firing.

“I had to fire General Flynn because he lied to the Vice President and the FBI. He has pled guilty to those lies. It is a shame because his actions during the transition were lawful. There was nothing to hide!” Trump tweeted.

The revelation changes the timeline of the drama in a potentially dangerous way for Trump.

At the time of Flynn’s dismissal, the White House acknowledged only that he had lied to Vice President Mike Pence—not the FBI—about his discussions with Russian ambassador Sergey Kislyak over sanctions then-president Barack Obama slapped on Russia for meddling in the election.

Trump’s ties with Flynn have been under intense scrutiny since the president fired FBI director James Comey in May.

Comey testified under oath before a Senate panel in June that a day after Flynn’s firing, Trump asked him to drop an investigation into the former national security director.


Trump also repeated his denials of collusion with Moscow.

“What has been shown is no collusion. There’s been absolutely no collusion. So we’re very happy,” he told reporters as he left for a day trip to New York.

Special prosecutor Robert Mueller’s focus goes beyond possible collusion with Russia to shady business dealings and whether Trump himself tried to thwart the investigation.

If Trump’s latest statement on Twitter is accurate, it would mean that when he pressed Comey to drop the probe into Flynn, Trump already knew that Flynn had lied to Comey’s agency.

A lingering part of the drama has been that after the White House learned through the Justice Department that Flynn lied to the White House about discussing sanctions with the Russian ambassador, Trump still waited 18 days to fire him.

Trump fired Comey in May and said he had the Russia probe in mind when he did it. The move backfired and led the Justice Department to appoint Mueller as the special prosecutor.

Trump’s tweet about Flynn lying to both Pence and the FBI prompted Representative Adam Schiff of California, the top Democrat on the House Intelligence Committee, to pose some follow-up questions.

“If that is true, Mr. President, why did you wait so long to fire Flynn? Why did you fail to act until his lies were publicly exposed?