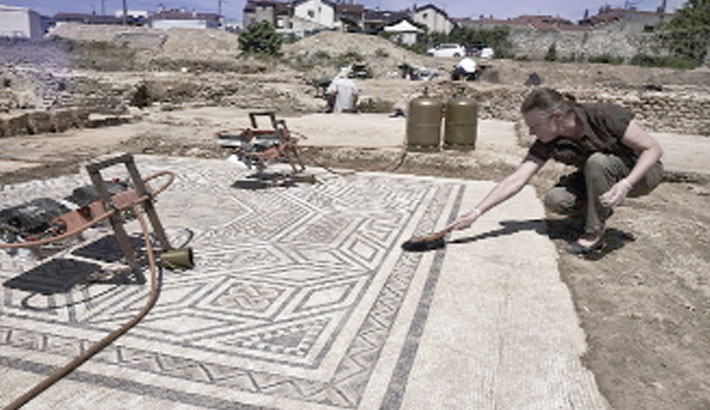 A “little Pompeii” is how French archaeologists are describing an entire ancient Roman neighbourhood uncovered on the outskirts of the southeastern city of Vienne, featuring remarkably preserved remains of luxury homes and public buildings, reports AFP.

“We’re unbelievably lucky. This is undoubtedly the most exceptional excavation of a Roman site in 40 or 50 years,” said Benjamin Clement, the archaeologist leading the dig on the banks of the Rhone river, about 30 kilometres (18 miles) south of Lyon.

The city of Vienne—famous for its Roman theatre and temple—was an important hub on the route connecting northern Gaul with the Roman province of Gallia Narbonensis in southern France.

The site unearthed on land awaiting construction of a housing complex covers an area of nearly 7,000 square metres (75,000 square feet) — an unusually large discovery in an urban area that has been labelled an “exceptional find” by the French culture ministry.

The neighbourhood, which contains homes dating to the 1st century AD, is believed to have been inhabited for around 300 years before being abandoned after a series of fires.

Many of the objects in place when the inhabitants fled were conserved, transforming the area into a “real little Pompeii in Vienne”, according to Clement, referring to the Roman city-state that was largely preserved after being buried by volcanic ash.

Among the structures to have partly survived are an imposing home dubbed the Bacchanalian House after a tiled floor depicting a procession of maenads (female followers of the god of wine, known variably as Dionysus or Bacchus) and joyful half-man, half-goat creatures known as satyrs.

A blaze consumed the first floor, roof and balcony of the sumptuous home, which boasted balustrades, marble tiling, expansive gardens and a water supply system, but parts of the collapsed structure survived.

The archaeologists believe the house belonged to a wealthy merchant.

“We will be able to restore this house from the floor to the ceiling,” Clement said.

In another house, an exquisite mosaic depicts a bare-bottomed Thalia, muse and patron of comedy, being kidnapped by a lustful Pan, god of the satyrs.

The mosaics are being removed with infinite care and taken away to be restored, with a view to being exhibited in Vienne’s museum of Gallo-Roman civilisation in 2019.

Among the other finds are a large public building with a fountain adorned by a statue of Hercules, built at the site of a former market.
Clement believes it may have housed a philosophy school.

The excavations, which began in April, had been due to end in mid-September but have been extended by the French state until the end of the year to allow time for more discoveries.

In the coming months Clement’s 20-strong team will dig down to older parts of the site and explore an area containing workshops.