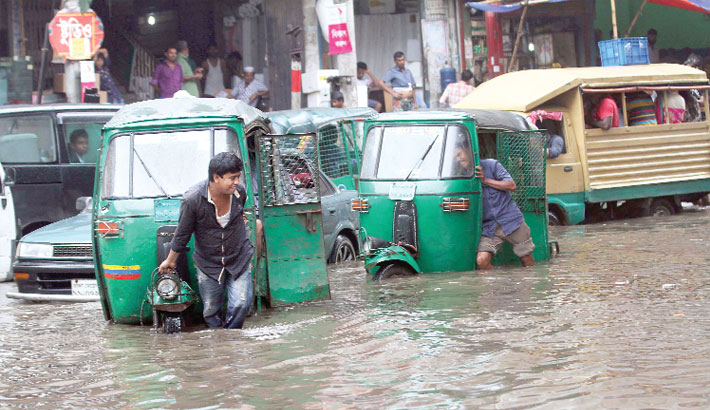 Just an hour-long rainfall submerged  major streets and low-lying areas in the capital on Wednesday, throwing the normal life out of gear and exposing the poor drainage system of the city again.

In the circumstances, commuters faced severe problems in reaching their destinations in absence of adequate number of transports on submerged roads.

The monsoon rain intensified sufferings of commuters amid long tailbacks on waterlogged streets.

In many places, people had to wade through knee to waist-deep water.

It was found that rainwater could not flow freely due to blockages in sewage pipelines.

Dhaka witnessed 24-mm of rainfall from 1:27pm to 3:00pm, according to the Bangladesh Meteorological Department.

Sifat Rahman, a resident of Mirpur, told daily sun that he had to struggle to reach his destination from Motijheel due to waterlogging and huge traffic jam on roads.

Ziadul Islam, a CNG-run auto rickshaw driver, said as his vehicle went out of order in rain water at Mirpur 10, he could not carry any passenger.

Motorised vehicles could not ply the road from Mouchak to Malibagh level crossing as it went under water, forcing commuters to pass the portion on foot through rain water.