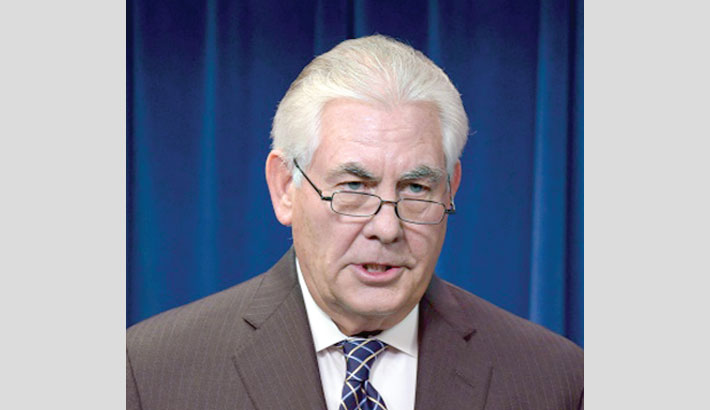 WASHINGTON: US Secretary of State Rex Tillerson said Tuesday he will meet with his Russian opposite number Foreign Minister Sergei Lavrov over the weekend, but warned US-Russia ties could still get worse, reports AFP.

Some in Moscow and Washington had hoped relations between the former Cold War foes might improve under US President Donald Trump, who has had warm words for President Vladimir Putin.

But the great power rivals remain divided over Russia’s intervention in Ukraine, US sanctions against Kremlin allies and Moscow’s support for Bashar al-Assad’s Syrian regime.

Tillerson has never tried to sugarcoat the problems, and admitted in March after a visit to the Kremlin that ties were at a “historic low” with little sign of improvement.

But now Trump is poised to sign into law a bill to further tighten sanctions and Putin has ordered the US diplomatic mission in Russia to cut hundreds of staff.

“And the question, I think, of the events of the last week or so, is it getting worse or can we maintain some level of stability in that relationship?” Tillerson asked.

Tillerson said the US Congress decision to pass the sanctions bill had made attempts to thaw ties “more difficult,” but that “all the indications are” that Trump will sign it.

In the meantime, Tillerson plans to meet Lavrov in Manila on the sidelines of an ASEAN ministerial meeting.

A special prosecutor is investigating whether Trump advisers colluded with what US intelligence has concluded was an attempt by Russia to covertly support his 2016 campaign.

The US president, who often called for warmer ties with Moscow during the White House race, has furiously denied the charge, which has further clouded relations.

Meanwhile, Rex Tillerson also promised Tuesday that the United States is not trying to topple Kim Jong-Un’s North Korean regime, but warned it must halt its nuclear missile program.

Briefing reporters on diplomatic efforts to pressure Pyongyang, Tillerson said Washington would be willing to talk to the North if its leaders accept that they must disarm.

“We don’t think having a dialogue where the North Koreans come to the table assuming they’re going to maintain their nuclear weapons is productive,” he warned.

But he sought to reassure the isolated authoritarian regime that it does not need a nuclear arsenal to defend itself from a US attack.

“We do not seek an excuse to send our military north of the 38th parallel. And we’re trying to convey that to the North Koreans.

“We are not your enemy. We’re not your threat, but you are presenting an unacceptable threat to us, and we have to respond.”

US President Donald Trump has demanded that China, North Korea’s neighbor and biggest trade partner, rein in its nuclear ambitions—angrily tweeting over the weekend that Beijing is not doing enough.