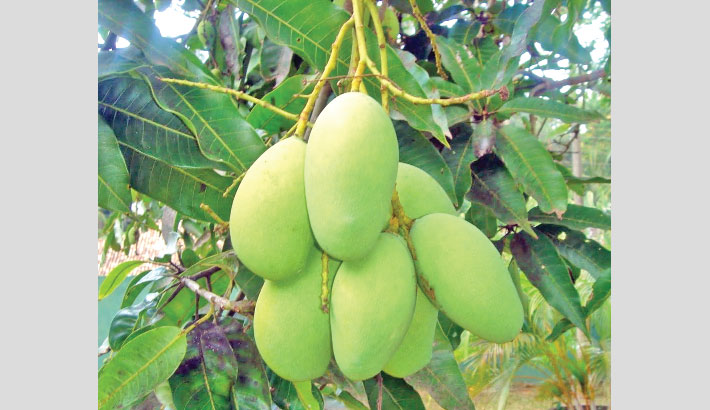 Mango farmers in Rajshahi and Chapainawabganj districts are incurring huge losses due to fixation of time frame by the government for mango harvest.

Aiming to prevent mango adulteration, the district administrations of Chapainawabganj and Rajshahi  fixed a time frame for mango harvest in 2015.

But this time frame for mango plucking has been a severe trouble for mango growers, as they do not get adequate price of their produce amid the influx of foreign mangoes in local markets at the same time.

As a result, mango growers are to sell their produce at low prices.

Earlier, the deputy commissioners (DCs) of Chapainawabganj and Rajshahi  fixed the deadline of May 25 for plucking Gopal Bhog and Guti varieties of mangoes, June 1 for Himsagar and Khirshapati, June 10 for Lengra, June 25 for Fajli, July 1 for Amrapali and July 15 for Ashwina.

However, during a meeting chaired by Chapainawabganj DC Md Mahmudul Hasan on Thursday, it has been decided to keep the deadline of May 20 for plucking any types of mangoes but relaxed the time frame for others varieties.

This year they also fixed the deadline of May 20 for harvesting Guti varieties, May 25 for Gopal Bhog, May 28 for Himsagar and Khirshapati, June 1 for Lengra and Bombai, June 15 for Fajli and Amrapali, July 1 for Ashwina and gradually for other mango varieties.

Local farmers and traders have protested against the fixed time frame.

He said mangoes get matured at different times in various villages in Chapainawabganj and Rajshahi and the region is unique for mango range.

He said they want withdrawal of the deadline and compensation for the affected farmers.

Md Shahjahan, a mango grower and trader in Chapainawabgaj, said, “We appreciate the government steps to prevent mango adulteration but they have to fix the timeframe following the actual ripening time.”

“If mangoes get matured before the time frame then the farmers can pluck them after getting permission from local agriculture official and administration,” he said.

According to the regional office of the Department of Agriculture Extension (DAE) Rajshahi, mango output was 0.325 million tonnes on 32,816 hectares of land in Chapainawabganj and Rajshahi districts last year.

The country produced 1.018 million tonnes of mangoes last year of which 0.5 million tonnes were on commercial basis in Chapainawabganj, Rajshahi, Natore, Satkhira, Jhenidah, Rangpur and elsewhere in the country.