Yaba smugglers must be punished: PM 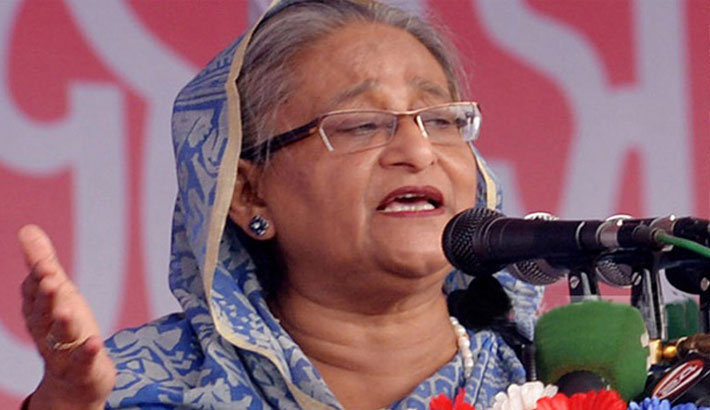 Cox’s Bazar: Issuing a strong warning against Yaba dealing, Prime Minister Sheikh Hasina on Saturday said those involved in Yaba trade will surely face punishment as the tourist town of Cox’s Bazar earned a bad name due to this illicit business, reports UNB.

“Those who are involved in Yaba business will definitely face punishment, no matter who they are...there’s no mercy for them,” she said.

She said Cox’s Bazar earned the bad name as Yaba are supplied to the whole country from this area. “This Yaba business has to be rooted out.”

Sheikh Hasina urged all, including parents, guardians, teachers and imams, to take a strong stance against the social menaces like terrorism, militancy and drugs.

Terming Islam a religion of peace, brotherhood and friendship, she said there is no room for militancy and suicide in Islam. “There’s no scope for suicide in Islam, those who think that by this they will go to the heaven will just land in hell.”

The Prime Minister assured the local people of turning Cox’s Bazar into an exclusive tourist zone, and announced to upgrade Chittagong-Cox’s Bazar highway to a four-lane one.

Describing various programmes undertaken for the development of the Cox’s Bazar region, the Prime Minister said, power stations, including Matarbari coal-based power plant are being constructed at Moheshkhali, and other development projects, including the construction of railway lines from Chittagong to Ghundhum via Cox’s Bazar, are also in progress.

She said as part of the initiative of establishing 100 economic zones to industrialise the country, a special economic zone will also be set up at Sonadia while a deep seaport will be constructed there.

Talking about the recognition of Quwami Madrasah education, Hasina said there was no certificate and specific curricula for them. “We’ve formed a committee to fix their curricula...we’ve taken steps to give them certificates.”

She also mentioned that her government has established an Arabic Islamic University where students from Quwami Madrasahs will get higher education.

The Prime Minister said there are 14 lakh students in the Quwami education system. “We cannot drive them away... they’re the children of this country... we’ll have to develop their lives, too. We’ve taken steps for that.”

Hasina also called upon the people of the country to cast votes for Awami League in all the elections to be held in the future to maintain the trend of development in the country. “Boat is a symbol of people and development.”

Turning to the brutal assassination of the Father of the Nation in 1975, the Prime Minister said the politics of killing, coup and conspiracy had begun at that time.

The military dictators who came to power illegally and violating the country’s constitution created an elite class giving various unlawful benefits to them to perpetuate their power, said the Prime Minister said adding that they played ducks and drakes with the fate of people.

Hasina said her government constructed the world’s third biggest international cricket stadium in Cox’s Bazar and has a plan to build an international standard Football stadium there.