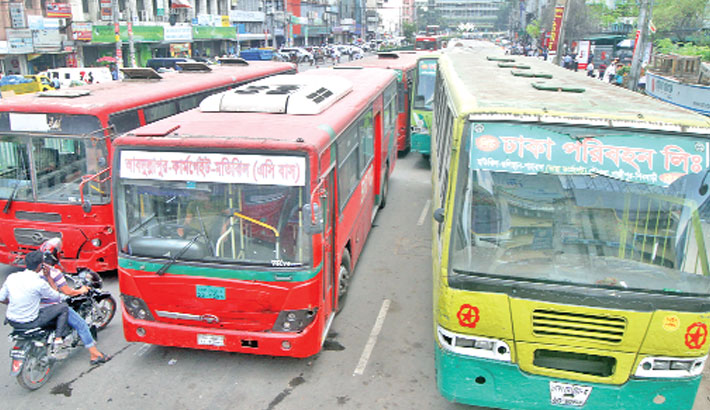 A tailback has been created in the capital’s Motijheel area on Saturday due to haphazard parking.

A large number of intercity buses are parked with reckless abandon on both sides of many busy roads in the capital, worsening the  traffic congestion.

Many city dwellers said illegal parking of passenger buses and other vehicles on narrow roads has intensified traffic jams in the city, mounting public sufferings.

Besides, hundreds of long-haul buses are also kept on streets for lack of parking space at local bus terminals.

They also said the number of buses is going uphill in the metropolis, but most of their operators do not have their own places for bus parking at off-times, especially at night.

Besides, thousands of bus counters have been set up on different roads and footpaths, disrupting traffic and public movement.

Transport workers said three inter-district bus terminals at Gabtali, Sayeedabad and Mohakhali in the capital are packed with long-haul buses.

During a visit to Maniknagar and Sayedabad, this correspondent found that a large number of bus counters of different companies have been set up on busy roads.

Illegal parking of city buses and minibuses at night and even daytime has virtually turned some streets into bus terminals, local residents said.

Jashimuddin, a furniture trader of Maniknagar area, said around 100 counters of different bus companies have been set up within a distance of half a kilometer distance there.

About 40 buses of each bus operator usually park their buses in front of their counters a day are causing severe traffic congestions in the area, he added.

Asfaq Hossain, a counterman of a bus, said bus owners are very powerful. They are running their business through managing some policemen.

Transport traders are keeping their vehicles on busy roadsides, blocking the main roads every day under the nose of law enforcers.

An allegation is rife that police sergeants keep mum without taking any measures against illegal parking of vehicles.

Some sergeants collect tolls from different vehicles in the name of checking their papers, Shahida Begum, a roadside tea-stall owner, alleged.

BRTC buses are also parked just opposite to its Motijheel depot and Notre Dame College.

The traffic situation was so severe that it took hours to travel even less than a distance of half a kilometre.

DMP Joint Commissioner (Traffic-South) Mofijuddin if any policeman is found guilty of toll collection, stern action will be taken against him.

Asked about the illegal parking without permission, he replied that they were continuously dealing with the situation.