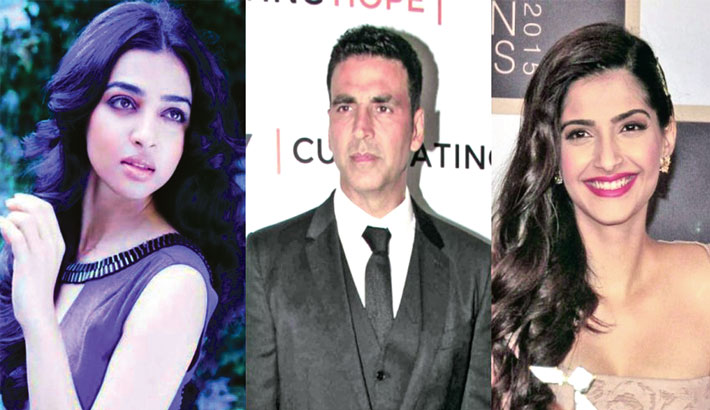 Akshay Kumar and Sonam Kapoor have returned to Mumbai and commenced their shooting, after receiving the prestigious National Award from President Pranab Mukherjee in New Delhi on Wednesday, May 3, reports Bollywood Mantra.

Akshay and Sonam, who are currently shooting for ‘Pad Man’, turned the sets of the film into a party venue and celebrated their big win with the crew members. It is the first National Award for both the actors. While Akshay was bestowed the Best Actor for ‘Rustom’, Sonam got a Special Mention for her performance in ‘Neerja’, which was adjudged the Best Hindi Film at the 64th National Film Awards.

"Everyone on set decided to get a cake for them. We popped open a bottle of champagne too," a member of the film’s unit was quoted as saying.

Sonam also shared a video on her Snapchat of her cutting a cake with Akshay as the actor fed her a piece of the lip-smacking cake.

The unit is currently shooting an important sequence of the film and the set has been put up in Manori. This requires the actors to travel to the set at the beach side village by a ferry daily. Pictures of Akshay and Sonam, accompanied by crew and their personal bodyguards travelling by a public boat after returning from Delhi, are doing the rounds of internet.

‘Pad Man’ marks the debut of Akshay’s wife Twinkle Khanna’s production banner Mrs. Funnybones Movies. Directed by R Balki, the movie is based on one of the stories from Twinkle’s book, ‘The Legend of Laxmi Prasad'.  It is inspired from the life of Arunachalam Muruganantham, who campaigned extensively for menstrual hygiene and made affordable sanitary napkins for women in his village. The movie also stars Radhika Apte.