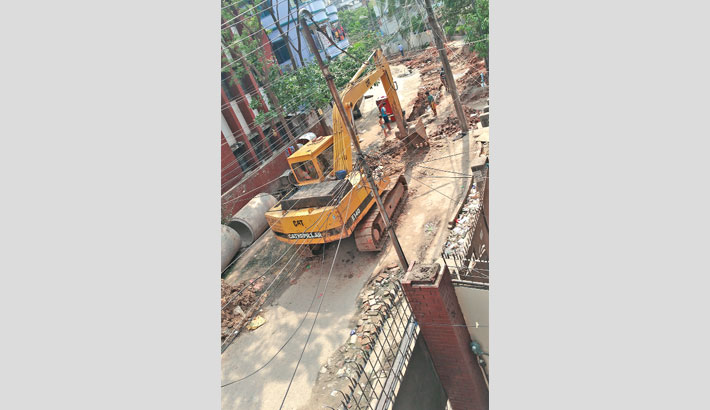 Khilgaon-Malibag-Mouchak commuters have already been undergoing difficulties due to frequent digging of the roads. A new woe – the outbreak of diarrhoea has been added to their sufferings creating unhealthy condition for the locals.

The sufferings of the residents of these three areas seem to be never-ceasing. With the early arrival of Monsoon this year, the road reconstruction authorities concerned cannot precede their work. As a result, the roads are getting clogged with stinky and filthy water due to the lack of proper drainage system. Again, because of random digging, the supply water of WASA, through the pipeline leakages, is getting contaminated with the filthy water, causing the outbreak of diarrhoea.

My own family suffered from diarrhoea. My mother got bed ridden sick since past three days out of uncontrolled diarrhoea. Even four bags of injected saline couldn’t cure her yet. Prior to that, the other members of my family went through it. In fact, other residents of our building reported to have suffered from this disease too. The outbreak of diarrhoea, however, is putting the lives of the locals in danger.

“Everyone of my family suffered from diarrhoea since past few weeks. Two of my neighbours died out of dehydration followed by uncontrolled diarrhoea,” says a resident of Khilgaon area.

A source of Khidmah Hospital reports, “In a week, a good number of local diarrhoea patients got admitted to our hospital. Among them 40 per cent are children.” The source also said that most of them are coming from Khilgaon, Malibag, Magbazar, Hazaribag areas.

“I always give filtered water to my children; yet, my 5-year old daughter got jaundice. I don’t know how it happened. I am suspecting that maybe while taking shower or somehow she swallowed few drop of unfiltered supply water,” says a parent who admitted her daughter in the hospital.

However, Bangladesh is aspiring to emerge as a middle income country by 2021. To be turned to a middle income country, attaining the eight Millennium Development Goals (MDGs) is inevitable. Among them, combating the infectious viral diseases such as diarrhoea, malaria, dengue etc caused by the unhygienic living condition is on the top of the list. If the unhygienic living condition of the capital continues to remain unaltered, unnoticed, the dream will remain just a dream.

Nevertheless, development is a far cry unless we pay heed to the prevalent alarming issues. To conclude, with this article, I would like to draw the attention of the authorities concerned of these areas to look into this matter seriously before it is too late to take any effective measure.