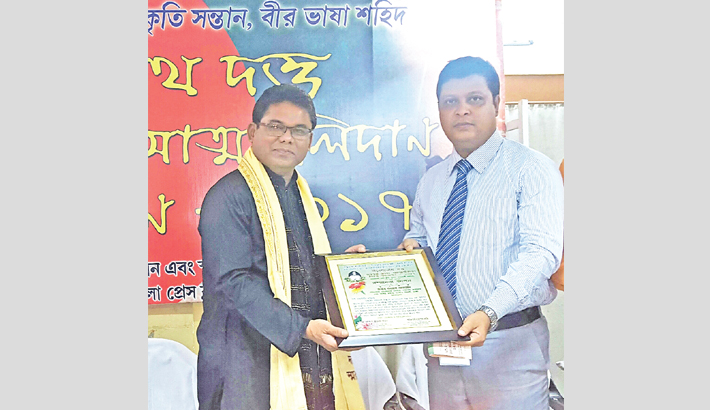 Singer Kamal Ahmed is truly inspired by the humanitarian aspects of Rabirdranath and patriotism of Bangabandhu Sheikh Mujibur Rahman.
Recently, he has been awarded “Bir Shaheed Dhirendranath Dutta Award” from Tripura of India.

He got this award for his immense contribution in nourishing sound Bengali culture; basically for his outstanding effort in publicizing and spreading out Rabindra Sangeet among mass and spirit of Bangabandhu Sheikh Mujibur Rahman.

He was invited on March 26 to attend in a programme at Agartala for celebration of Independence Day of Bangladesh by Bangladesh High Commission Consular office in Tripura.

He gave his effort to present accurate picture of our language movement and liberation war in his speech. He performed some Rabindra Sangeet at the end part of the programme.

Kamal Ahmed also read out some parts from “Unfinished Autobiography” of Bangabandhu during delivering speech. Besides, he offered some patriotic songs of Rabindranath.

He became surprised to get the award because it was not conveyed to him earlier.  The first secretary of Bangladesh High Commission, consular office of Agartala, Md Moniruzzaman handed over the award.

Honorable Governor of the State Shree Tathagato Roy and Deputy Speaker of Tripura Legislative Assembly Pabitra Kar were present on the occasion .

It is noticeable that an album named “Mohakabyer Kabi” was released by Kamal Ahmed  from Raga Music of India on 15 August 2016.


All the songs of that album were tuned for showing respect and love for the Father of The Nation Bangabandhu Sheikh Mujibur Rahman.