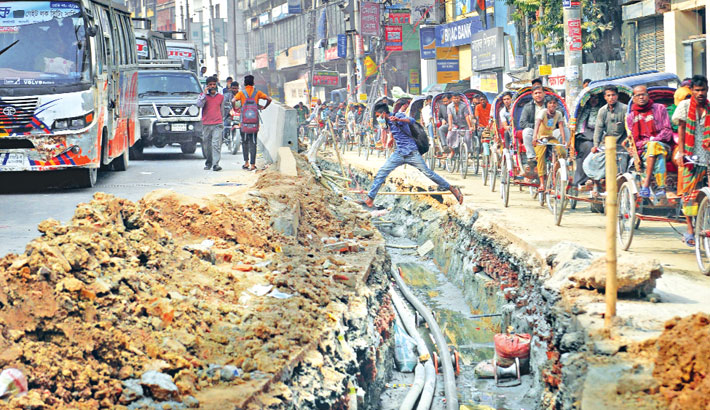 Still No Respite........ : Road digging along the Moghbazar-Mouchak-Malibagh road causes immense suffering to the city dwellers. The snap was taken on Friday.-SUN photo

The traffic jam, which is an everyday trouble for Dhaka dwellers, has taken a turn for the worse due to uncoordinated road digging by different utility service-providing agencies amid the construction of new buildings and flyovers alongside demolition works, reports UNB.

Experts and city commuters said the absence of coordination among the agencies implementing development projects has brought the city traffic to its knees apart from flushing public money down the drain.

Alongside flyovers, implementation of projects by different utility agencies in Moghbazar-Mouchak area is the glaring example how the lack of coordination among agencies is intensifying public woes.

Barely a month ago, the authorities concerned of Moghbazar-Mouchak Flyover Project repaired the roads in the project area, aiming to ease the sufferings of commuters. But, the Dhaka Power Distribution Company (DPDC) recently started digging the newly-repaired roads in Moghbazar area to lay underground electric cables giving the monstrous traffic jam a regular shape.

Khandaker Mahbubur Rashid, 50, a resident of New Circular Road of Malibagh said the digging work could have been done right before the roads were repaired. “But, things have become horrible. Now you cannot even move on foot in the area, let alone passing by in motorised vehicles.”

Apart from road cutting by the DPDC, the Dhaka South City Corporation (DSCC) is also reinstalling drainage system in Moghbazar-Mouchak area and other areas of the city by digging footpaths, obstructing the movement of pedestrians.

“Had the DPDC and the DSCC begun their works maintaining coordination with us, a huge amount of public money could be saved and public sufferings minimised,” said Sushanto Kumar.


Contacted, DPDC Managing Director Nazrul Hasan said they started the digging work in Mogbazar-Mouchak area to set up the 132-KV underground cable from Rampura to Dhanmondi, which is the lifeline for the electricity of the capital’s western zone.

As the existing cable line of the DPDC went under the flyover pillars, they were forced to set up a separate underground line beside the flyover there, he claimed.

Asked why they started the works without maintaining any coordination with the authorities of Moghbazar-Mouchak flyover, Nazrul said, “We had sought permission from the DSCC to start the work nine months back. But we got the permission now following a coordination meeting held at the city corporation.”

“We don’t get permission to do the work anytime except the winter season. They allow us only three months - December, January and February,” he said.The DPDC Managing Director said it will take only two weeks further to complete their works in Magbazar-Mouchak area.

DSCC Additional Chief Engineer Md Asaduzzaman claimed that the works on different projects are now being implemented in a better coordinated way than they did in the past. “But, there’s no alternative to strengthening the coordination among different utility agencies in the city to minimise public sufferings and save public money.”

About the DPDC’s works in Moghbazar-Mouchak area, Asaduzzaman said, “If the digging works would have started during the full-swing construction works of the flyover, the entire road would have blocked.”

Noted urban planner Sarwar Jahan said all the city agencies are preparing and implementing their plans without maintaining coordination with others. “City corporations, Rajuk, the DPDC and other agencies are implementing their plans in the capital on their sweet will, but works of all the agencies must be brought under a strong and single authority to ensure coordination among them,” he suggested.

Sarwar Jahan, also former president of Bangladesh Institute of Planners, said if coordination is not ensured among all the government agencies, there will be no complete solution to any problem, he said, adding that all urban problems will turn acute in the days to come.

Engineer Abdus Sobhan, former additional director general of the Department of Environment, said when four urban agencies, for example, need to cut a road to carry out their works, the agencies are seen cutting it four times on separate occasions for lack of coordination among them, wasting public money.

He said when the utility agencies like the DPDC and Dhaka Wasa dig city roads, the city corporations realise fees from these agencies to repair roads but the corporations hardly do it timely.