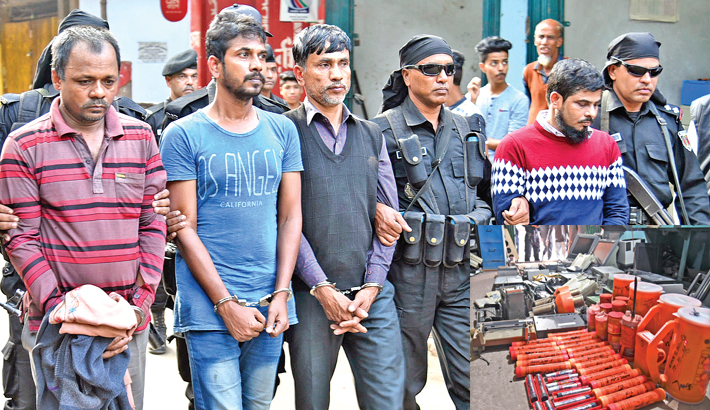 RAB produces four staff members of a shop before the media after they arrested them from the shop at a market in the port city’s Pahartali area on Sunday on charges of keeping illegal communication devices, including satellite phones (inset), at the shop.SUN photo

RAB-7 Commanding Officer (CO) Lieutenant Colonel Miftah Uddin Ahmed told the daily sun that buy and sale of these equipment without permission from the concerned authorities is illegal.
Some unscrupulous businessmen collect those equipment from scrap vessels and later sell from the market, he said.
The criminals of bordering areas use these equipment for illegal trade of Yaba, hundy and others. Besides, those can be used for overhearing the conversation of law enforcement agencies, said the CO.
“We will investigate to whom those equipment were sold earlier and use of them,” he added.
Executive magistrate and officials of BTRC were present during the drive led by Major SM Sudipta Shaheen of the RAB.