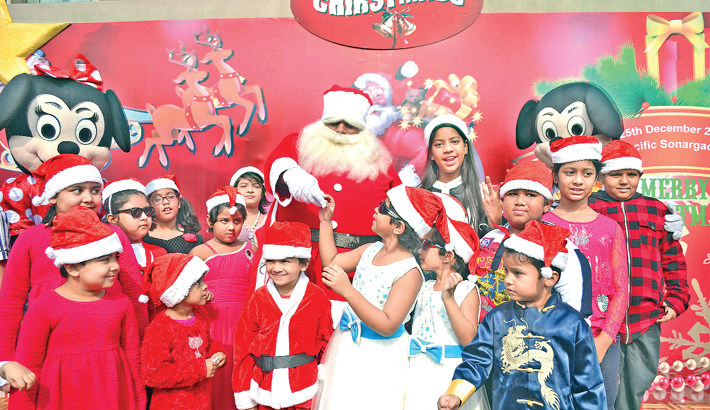 The Christian community of the country celebrated Christmas on Sunday with pledges to work for peace and humanity following the ideals of Jesus Christ.
Christmas, the biggest religious festival of the Christian community, is a celebration of rebirth, new beginning, forgiveness and peace, and renewing relationship with God and human beings.
BSS adds: President Abdul Hamid and Prime Minister Sheikh Hasina issued separate messages by greeting the members of the Christian community on the occasion of the Christmas.
This year’s Christmas celebration in Bangladesh got extra colour as Pope Francis appointed Archbishop Patrick D’Rozario, the highest ranking priest of the Roman Catholic Church in the country, as a cardinal, the first ever from the country.
Pope Francis on November 19 promoted D’Rozario and 16 other Roman Catholic prelates from around the world to the rank of cardinal.
The Christians in Bangladesh celebrated the Xmas festival with huge enthusiasm and religious fervor and holding special prayers, illuminating churches and installing makeshift Xmas trees at homes and places of worship and missions.
Ringing of church bells in the midnight marked the advent of the day when the followers of the faith welcomed it with carols assembling in churches and other such venues.
Churches and adjoining areas were decked out with colourful tiny blinking lights, while illuminated Christmas trees placed with a star standing right on top as elder people of the community attired in the outfit of Santa Claus made fun with children and distributed gifts as part of a universal Christian practice. The security was beefed up at different strategic points in the capital and many other places of the country to ensure peaceful celebration of the festival.
Muslim-Hindu-Bouddha-Christian Sampriti Parishad staged a rally and human chain in front of Jatiya Press Club here this morning to strengthen inter-religion harmony
The national dailies published special articles on the Xmas, while Bangladesh Television, Bangladesh Betar and private radio stations and TV channels broadcast special Christmas programmes.
In Chittagong: Christmas Day, the biggest religious festival of the Christians community marking the birth of Jesus Christ, was celebrated in the port city as elsewhere in the district with festivity and fanfare.
Churches and adjoining areas were decorated with colorful tiny blinking lights and illuminated Christmas trees were placed with a star standing right on top.
On the occasion, special dishes were prepared in the families of members of the community and the children were seen seeking blessings from the elders.
Apart from organizing special prayers in churches, cutting Christmas cakes, carol singing, exchange of pleasantries and decoration of Xmas trees and main houses of the Christian were the major features of the day.
Churches in the city’s Pathargata and Jamal Khan Road vibrated with daylong frequent visit of Christians where they joined in special prayers.
Christian religious leaders in the port city exchanged pleasantries with dignitaries on the occasion.
Chief priest of the Patharghata Cathedral Church Father Terence Radix, along with local elites and elected representatives sliced the Xmas cake at the reception function in presence of a good number of dignitaries.
Local elite exchanged greetings with the leaders of Christain community in Chittagong. Besides, Hotel Agrabad, Hotel Peninsula Chittagong arranged a “Kids’ Party with Shanta” on the occasion of the holy day.
A huge size Christmas cake was cut by the hotel authority with children of different ages who were present there.
In Narayanganj: Members of the Christian community celebrated the holy Christmas, the birth of Jesus Christ, amid joy and jubilation.
In observance of the day, the authority of the St. Paul’s Church at 135 B.B Road of Chashara chalked out programmes which included prayer in praise of Jesus Christ and his mother Merry, decoration of Christmas tree and crib, Christmas carol, recitation from the Bible and cutting of Christmas cake.
A prayer was held inside the decorated church at 8.30am.
Several hundred Christians including male, female and children participated in the prayer in praise of Jesus Christ and his mother Merry. Father Augustine Amole Rosario led the prayer.
A special prayer was offered for world peace as well as peace and prosperity of Bangladesh and for long life of Prime Minister Sheikh Hasina.
The Christmas carol over, the father cut Christmas cake to pieces and distributed among the devotees. They hugged each other saying “Happy Christmas”.
The St. Paul Church was profusely illuminated.
A large number of Police and RAB were deployed in front of the Church.
Police Super Moinul Haq visited the church.
Similar programmes were chalked out at Charargope Baptist Church on the occasion.
A Correspondent from Barisal adds: Christmas was observed amid great festivities and popular enthusiasm in the city.
More than 20 thousand members of the three major Christian sects of the city partook in the event.
The festivities started with the children fair which was organized at churches on Saturday afternoon.
The Christian Churches of the city, including Mother Teresa’s Home, Christian Religious Training Center, Care, Caritas, YMCA and YWCA, arranged different types of programmes.
The churches and adjoining areas were decked out in multi-coloured lights and illuminated Christmas trees.
Besides, Santa Claus handed over Christmas gifts
to the children.
Members of law enforcement agencies stepped up security to ensure peaceful celebrations in the city.
Barisal centre of Bangladesh Betar and cable operators of Barisal also aired special programmes on the occasion. In addition, a number of organizations and individuals threw parties to celebrate the festival.
Special religious prayer, inter-religious discussion meetings and cultural programmes were also held to mark the day.

In Rangpur, Christmas, the biggest religious festival of Christians, was celebrated amid tight security and due religious festivity in the district.
The daylong celebration programmes included morning prayers, recitation from the holy Bible, carol singing, exchanging pleasantries, cutting Christmas cakes, decoration of Xmas trees at Sadar Baptists Church and other places.
All of the Churches were decorated with lights and illuminated Christmas trees and the children were seen seeking blessings from their elders.
The Christian religious leaders welcomed the Christians and invited guests with floral wreaths at separate ceremonies in the Churches and gave speeches with the best wishes of Christmas.
The authorities of Rangpur Sadar Baptists Church, Balapara AG Church under Mithapukur upazila, Taraganj Church and Jihori Samos Church arranged programmes and discussions.
Father of Sadar Baptists Church Barnobas Hembrom, Pastor of Balapara AG Church Babul Roy and community leaders took part in the Christmas cake cutting ceremonies along with the Christians community people.
Different competitions for the children were arranged and prizes distributed at the religious institutions in the district.
The Christian religious leaders conducted special prayers along with the people of all ages of Christians seeking divine blessings for welfare, peace and prosperity of the whole humanity.
Deputy Commissioner Rahat Anwar visited different churches, congratulated the Christians.