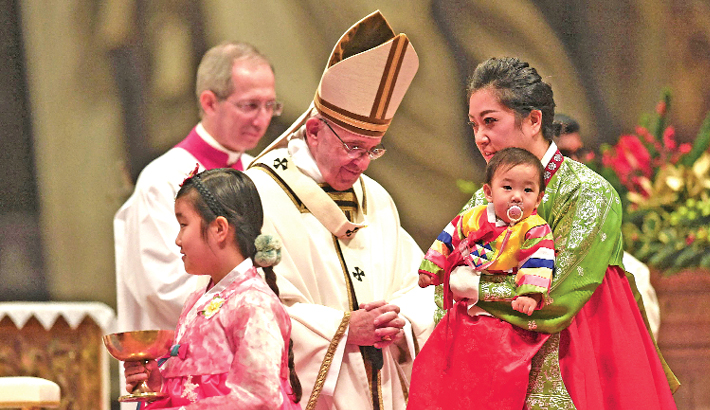 VATICAN CITY: Pope Francis urged peace in the Middle East as tens of thousands gathered to hear his Christmas address Sunday, while offering comfort to victims of terrorism after a year of bloody jihadist attacks, reports AFP.

The 80-year-old Argentine called for guns to fall silent in Syria, saying “far too much blood has been spilled” in the nearly six-year conflict.

And he urged Israelis and Palestinians to “have the courage and the determination to write a new page of history” in his message from the balcony of Saint Peter’s Basilica to a crowd of 40,000 gathered in the square below which, despite the sunny weather, was far from full.

As Europe ramped up security for the holiday just days after the truck attack that left 12 dead at a Berlin Christmas market, the leader of the world’s 1.2 billion Catholics said he hoped for “peace to those who have lost a person dear to them as a result of brutal acts of terrorism”.

In Milan, where suspected Berlin attacker Anis Amri was killed in a police shootout on Friday, there was a heavy police presence around the cathedral. The entrance has been protected by concrete barriers since the Berlin attack.

In France, where Berlin has raised grim memories of the jihadist truck rampage in June that left 86 people dead, 91,000 members of the security forces have been deployed to guard public spaces including churches and markets over the weekend.

Religious ceremonies in Germany were heavy with the weight of Monday’s attack, which was claimed by the Islamic State group. “Christmas this year carries a deep wound—we are celebrating this festival in a different way this year,” said Gebhard Fuerst, bishop of Rothenburg in the southeast.

But Baden bishop Jochen Cornelius-Bundschuh offered a note of hope. “At Christmas, a light shines in the world—it shines in powerful darknesses like those we have seen in recent years with the horror of war, civil war and terrorist attacks,” he said.


In Israel, security was tight for Christmas celebrations coinciding with the Jewish festival of Hanukkah.

Some 2,500 worshippers packed the Church of the Nativity complex, built over the grotto where Christians believe Jesus was born, for midnight mass in Bethlehem in the Israeli-occupied West Bank.